Farmers in Gokwe South are experimenting with drought-resilient crops as climate change affects their harvests. 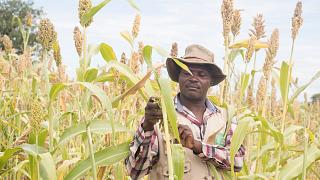 One afternoon in Mupindi Village, Gokwe South, more than 400 kilometres from Zimbabwe’s capital Harare, a smallholder farmer called Bernard Mupindi is pruning the rough, hairy triangular leaves that grow around the stem of a sunflower.

The blooming yellow sunflowers in this 3.5-hectare piece of land are less than a month away from harvest. Mupindi still recalls growing sunflowers for his family to eat around a decade ago, but he had no idea how quickly that would change.

Little did he know, growing sunflowers would soon serve to counter the effects of climate change.

“I used to grow cotton, maize as well as sunflower on a small piece of land. Back then we used to have better rains in this area,” he explains.

“For the past five years, we’ve been having a series of heatwaves. Maize and cotton farming became unproductive. So, I had to try drought-resilient crops such as sunflower.”

Other drought-resilient crops that Mupindi grows include groundnuts, Bambaranuts, millet and sorghum.

The father of three received training on drought-resilient crops farming in October 2019, which proved essential to his business today. He says he was taught at the Agricultural Business Center (ABC) in Gokwe, which uses a pro-business investment approach to help smallholder farmers have high income-generating potential.

ABC is a European Union-funded project which is being implemented by German charity, Welthungerhilfe (WHH) with support from Empretec Zimbabwe, a capacity-building programme of the United Nations’ (UN) trade agency UNCTAD.

Mupendi’s wife Alleta Muzenda was also part of ABC’s capacity-building training programme in October. She explains how it helped them to earn a living through sunflower farming.

“I can pay fees for my children and buy food for the family,” she says.

At the end of 2020, the UN World Food Programme estimated that the number of food-insecure Zimbabweans was up to 8.6 million people – a staggering 60 per cent of the population.

A combination of factors are to blame.

Zimbabwe is experiencing its worst economic crisis in decades with a three-figure inflation rate, leading to an increase in the cost of living.

The prices of basic commodities including maize, the staple cereal, have gone beyond the reach of many.

For the past five years, lack of rain leading to drought has been hitting subsistence farmers like Mupindi’s family hard.

The southern African nation, which was once the breadbasket of the continent, will import an estimated 1.1 million tonnes of grain in the 2020/2021 marketing year to meet demand, according to the UN Food and Agriculture Organisation.

But the power of the sunflower and other drought-resilient crops is that they can survive the dry spell for a month, says another smallholder farmer in Gokwe South, Savirios Chingura. Other crops like maize, however, cannot go for two weeks without adequate water.

In the fragile Zimbabwean economy, farmers struggle to buy inputs, but with sunflower and other drought-resilient crops, they can still have a bumper harvest without the need for any additional nutrients.

“Sunflower does not require any nutrients,” says Chingura. “We also get cooking oil from the seeds and stock feed.”

Mupindi village head, Hlekiso Mupindi, says drought-resilient crops have proven to be effective in safeguarding his community against hunger as well as mitigating the impacts of climate change.

“We had to embrace drought-resilient crops in this area. This helps us to be food secure,” he says.

Shumirai Mabeka, an Agricultural Technical and Extension Services (Agritex) supervisor in Gokwe South, is positive about the future. She says they are expecting a better harvest this season when compared to the previous two seasons.

“This year even those smallholder farmers who were not part of the ABC project also grew drought-resilient crops in their fields. Our crop harvest this year is promising because we even had flash floods for the first time in two seasons,” Mabeka adds.

Cumulative rainfall and distribution can be crucial to the success of the harvest.

ABC general manager, Vernon Mushoriwa, says even though they aim to

to reach up to 15,000 people with their project, they have already made contact with 5200 farmers and 4800 youths have also learnt entrepreneurship skills.

“This entails researching the best crops to grow as well as the best varieties. Drought-tolerant crops have been known to do very well in most parts of the Midlands Province, Gokwe in particular,” he says.

“Produced on a (large) scale, the crops can financially sustain those rural communities and ensure better living standards.”

At their processing factory in Gokwe Centre, ABC also uses the sun to dry mangoes for sale in supermarkets around the country.

With Coronavirus restrictions in place, farmers in Gokwe could not travel to Bulawayo, Zimbabwe’s second-largest city, 300 kilometres away, to sell their fresh mangoes, which resulted in an excess of the fruit. But they were rescued by a dried fruit processing centre which opened in November 2020.

The dried mangoes are sold for more than the fresh mangoes and are popular during the fruit’s off season.

Plus, the ABC also processes sunflower seeds into oil and peanuts into peanut butter.

WHH head of project, Thomas Heyland, says when WHH’s project ends in December this year, ABC working with farmers will continue generating enough profit to at least cover the running costs of the business.

“Farmers will be shareholders through the Farmers in Action Cooperative and thus have the possibility to guide the actions and decide with the other shareholders on how to reinvest profits,” he tells Euronews Living.

For smallholder farmer Mupindi, he hopes to grow drought-resilient crops like sunflower on most of his eight-hectare piece of land, next season.

“In the next season if I get the support, I wish to grow sunflowers covering three-quarters of the eight-hectares of land as part of my commercial farming efforts,” he concludes.