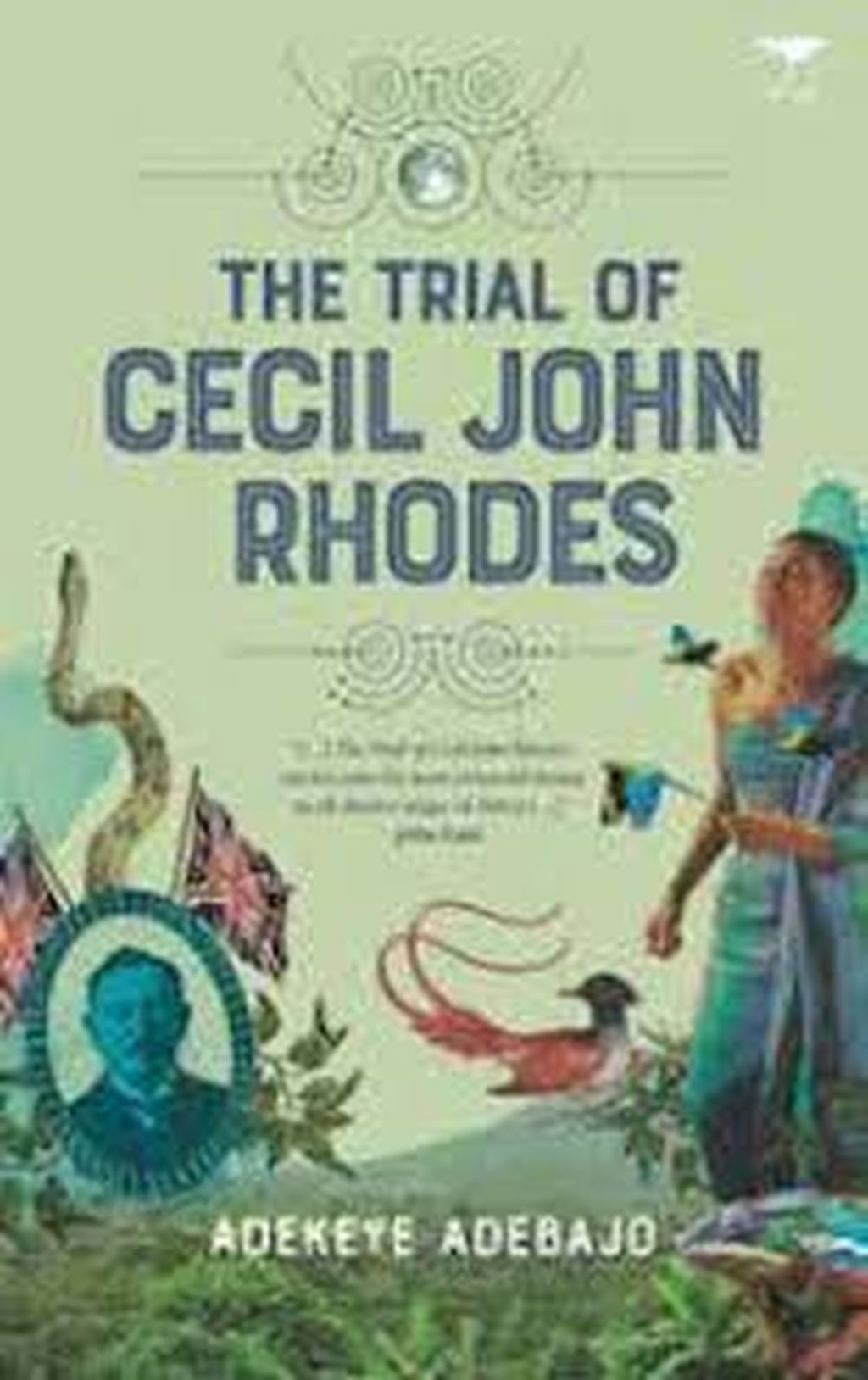 He made a fortune through gold mining, land theft, and dispossession, arguably helping to create the land crisis in present-day Zimbabwe and South Africa. To apologists for colonialism and white supremacy, he is viewed as a pacifier and civilizer of unruly African natives and a harbinger of modernity. According to disenfranchised and dispossessed postcolonial Southern Africans, he was a ruthless and bloodthirsty tyrant devoid of any shred of honor or decency.

Adekeye Adebajo is a former Rhodes Scholar. In The Trial of Cecil John Rhodes, he attempts to grapple with the man’s problematic legacy. In the novel, Rhodes, after his demise, finds himself in a purgatorial state called the Hotel Afropurgatorio, awaiting trial for his crimes against Africa. First, however, he must learn about the rich history of a continent he raped and pillaged with impunity. He must also become acquainted with the numerous accomplishments enshrined in the annals of African history, which in his lifetime he failed to learn, preferring instead to entertain salacious prejudices about the so-called “Dark Continent.”

Adebajo supplies juicy helpings of history to support his indictment. Apart from being “tried in this fifth heaven” for mass murder, Rhodes is also accused of racism, “grand theft of Africa’s natural resources and land,” “exploitation and enslavement of African workers,” and “egotism and a vainglorious quest for immortality.” The gallery of African and Africa-descended world luminaries enlisted to frame these issues is impressive: the Algerian Ahmed Ben Bella, one of the principal founders, in 1963, of the Organization of African Unity (precursor of the current African Union); Efua Sutherland of Ghana, a leading figure of modern African theater; Nelson Mandela and Nadine Gordimer of South Africa, both winners of the Nobel Prize (for peace and literature, respectively); and Wangari Maathai of Kenya, who won the Nobel Peace Prize for her stellar environmental work and activism. Also present are two more Nobel laureates in literature, Egypt’s Naguib Mahfouz and the United States’s Toni Morrison, as well as South African novelist Olive Schreiner, Zimbabwean historian Stanlake J. W. T. Samkange, and Arthur Lewis of the Caribbean nation of Saint Lucia, who won the Nobel Memorial Prize in Economic Sciences. The Nigerian jurist Taslim Olawale Elias, who was the first African president of the International Court of Justice in The Hague, Netherlands, serves as the presiding judge at Rhodes’s trial.

The passages relating the great civilizational feats of early Africa are the most inspiring in the novel. Perhaps this is because they often seem too great to be true; and with the distance of time, they are able to acquire a mythological grandeur whose radiance never diminishes. The feats of greatness in contemporary Africa, by contrast, seem rather too familiar, events and milestones we are inundated with by the mass media, a ceaseless regurgitation that threatens to turn the accomplishments into hollow, meaningless imagery.

Undoubtedly, Rhodes is a deeply polarizing figure, yet he is also indelibly lodged at the heart of modern colonial history. And unquestionably, his legacy leaves a bitter taste for many, one that makes them recoil in horror when confronted with the enormous impact of his deeds. His detractors view him as an arch-racist, mass murderer, unscrupulous businessman and politician, looter of African lands and natural treasures on a grand scale, and, finally, the architect of almost limitless human misery.

His legacy continues to cast a dark shadow over many of the nation-states of Southern Africa. Indeed, he was the de facto creator of these innately afflicted states, problematic polities forged out of an acrimonious history of pillage, rape, and duplicity. In all of these nations, a denial of Rhodes’s legacy would also entail, unfortunately, a negation of their own histories of bitterly sundered modernity; such is the prodigality of the Rhodesian legacy.

In 2015, students at the University of Cape Town began hurling buckets of excrement onto a centrally located statue of Rhodes. This daily ritual soon evolved into mass demonstrations that had global reverberations. Like the Black Lives Matter movement, the anti-Rhodes protests confronted issues of wealth redistribution, epistemic agency, and psychological liberation from the burden of (post)colonial oppression. Scholars and intellectuals were compelled to debate these unresolved issues in myriad ways. For example, Francis B. Nyamnjoh, a leading African sociologist at the University of Cape Town, published a book titled #RhodesMustFall: Nibbling at Resilient Colonialism in South Africa (2016), which uses the demonstrations to show just how implicated everything and everyone is in the Rhodesian web of deception and conquest.

During the #RhodesMustFall protests, one could scent the odor of revolution everywhere. Statues of and monuments to Rhodes and Paul Kruger (third president of the South African Republic) were desecrated, defaced, and toppled. Theorists of decolonization debated the pros and cons of post-apartheid (in)justice, reparations, and redress. For a few precious moments, a revolution powered by youthful minds seemed feasible. The old guard, made up of petrified white families cushioned by centuries of privilege and corrupt black politicians bent on maintaining the status quo, shuddered at the collective anger and mass violence. After years of enjoying post-apartheid largesse, these politicians suddenly realized that they were once full-blooded revolutionaries themselves and jostled to be relevant again in one dubious form or another. Their efforts, of course, were pathetic and laughable.

Adebajo’s novel adds layers of complexity to the canvas of a conflicted colonial legacy. The depth and extent of Nelson Mandela’s avowed multiculturalism, for instance, become more apparent. In Mandela’s view, building a cohesive post-apartheid nation mandated an effort to reconcile the seemingly irreconcilable divides of history, be they racial, cultural, ethnic, or ideological. Whether South Africans liked it or not, Rhodes was indelibly part of their history, and so the task before them, as liberated post-Rhodesian citizens, was to deploy the vast capital bequeathed by Rhodes to aid the causes of social justice, broad-based education, public health, and social welfare. But a question could be posed to Mandela’s utopia of reconciliation: how much of the Rhodesian legacy has actually been parlayed into socioeconomic redistribution on a mass scale? Don’t the real beneficiaries of Rhodes’s stolen bounty constitute only an infinitesimal fraction of the wider society? Can this blighted legacy really be deployed to wash away old crimes and sins, and thus lead to social reconstruction and rehabilitation? Arguably, this has hardly been the case.

Adebajo’s novel also compels a reconsideration of Mandela’s own legacy. In the pursuit of reconciliation, we are forced to ask, have the ideals of social justice been compromised? In the quest to bolster solidarity, what hard and necessary questions have we failed to ask? Here, Mandela’s principle of reconciliation falters. Instructively, Mandela consented to the establishment of the Mandela Rhodes Foundation in 2003, an accommodation with an agent of racial genocide that would be inconceivable for the descendants of Hitler’s victims.

In the novel, Rhodes is summarily condemned for his various crimes and sentenced accordingly. First, his remains at Matobo Hills in Zimbabwe are to be disinterred and reburied in his hometown in England. In addition, his stolen wealth is to be seized and redistributed as reparations to the descendants of his numerous victims in South Africa, Malawi (then called Nyasaland), Botswana, Lesotho, Zambia, and Zimbabwe.

Nigerian-born Adekeye Adebajo, a prominent scholar of international relations at the University of Johannesburg and a staunch advocate of Pan-Africanism, has provided a thought-provoking novel that spans the whole of the Africana world, from Africa to the Americas and the Caribbean. What unites Africa and its multiple diasporas are the shared histories of slavery, imperialism, colonialism, and decolonization. The imperial powers justified their rape and plunder of the African continent under the guise of mission civilisatrice — that is, the grand policy of civilizing the supposedly backward and barbarian “tribes” who resided there. Adebajo’s novel offers a rich store of information regarding the unsavory characters who carried out this scheme of subjugation, including Leander Starr Jameson, Rhodes’s redoubtable lieutenant and eventual nemesis.

Unfortunately, the novel hardly offers any suitable portraits of the ordinary victims of this epochal violence. The Trial of Cecil John Rhodes is thus a subaltern narrative sans subalterns. It would have been a more ideologically potent story, I think, if it had been conceived as a “history from below,” written from the perspective of the disenfranchised. This limitation, however, does not detract from what is, finally, a formidable novel of ideas that raises a number of urgent questions.

Sanya Osha is the author of several books, including Postethnophilosophy (2011), Dust, Spittle and Wind (2011), An Underground Colony of Summer Bees (2012), and On a Sad Weather-Beaten Couch (2015). He works at the Institute for Humanities in Africa at the University of Cape Town, South Africa.