MUREHWA DISTRICT, ZIMBABWE - Tobacco farmers in Zimbabwe, Africa's largest tobacco producer, are pinning their economic hopes on the addictive plant. Despite anti-smoking campaigns ahead of the World Health Organization's No Tobacco Day on May 31, farmers say the crop is one of their biggest sources of income. 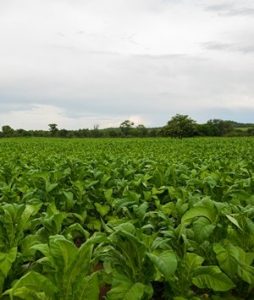 After quitting journalism at a government-controlled company four years ago, 39-year-old Itai Mazire went into farming. This year, he expects to sell at least 9,000 kilograms of tobacco from his eight-hectare plot, about 150 kilometers east of Harare.

Mazire says delayed selling seasons, due to the coronavirus pandemic, forced him to dip into his savings to pay workers. But Mazire says his harvest this year was the biggest ever and he expects sales to more than double that of 2020.

“This season is a success for us Zimbabwe tobacco farmers, in particular,” he said. “The rains were with us and we did our job. It’s a perfect story. We are curing our tobacco and every farmer will be smiling all the way to the bank. He gets his money, the economy improve[s], our foreign currency reserves will improve through tobacco.”

“The tobacco’s potential is immense,” he said. “It is in this regard that the government, together with stakeholders in the industry, is at an advanced stage of developing a three-pronged strategy. First, to increase annual production to 300 million kilograms largely from small holder farmers by 2025.”

Campaigners say Zimbabwe should instead work to replace tobacco, which is known to cause cancer, with other crops that are less damaging to health.

Sharon Nyatsanza, from the South Africa-based National Council Against Smoking, says people who use tobacco are more vulnerable to the coronavirus, the cause of the COVID-19 disease.

“Emerging signs show that people who are exposed to tobacco are at higher risk of developing worse COVID-19 outcomes. But beyond COVID-19 pandemic is a threat to humanity and it kills millions each and every year. It is very, very key for Zimbabwe to start to take significant strides to move away from tobacco farming and to invest more and to promote more alternative livelihoods for tobacco farmers,” she said.

For farmers like Mazire, the crop remains one of the best options to make a living in Zimbabwe’s long-struggling economy. Mazire says he plans to use more hectares for the 2021/2022 growing season, which begins mid-year.