Women work in the whole spectrum of mining operations—from artisanal and small-scale mining (ASM) to large-scale mining (LSM) operations. They are engineers, geologists and other scientists, but many women in mining are manual labourers.

Like many Africans, I am excited about what free trade and free movement of persons herald for the fortunes of Africans in the 55 nations of the African Union (AU).

As an African woman working in the mining sector, I asked myself what the AfCFTA means for the millions of women miners and entrepreneurs.

Women work in the whole spectrum of mining operations—from artisanal and small-scale mining (ASM) to large-scale mining (LSM) operations. They are engineers, geologists and other scientists, but many women in mining are manual labourers. Up to 99 per cent of women in mining are in the ASM subsector. Of the approximately nine million people in ASM in Africa, about 50 per cent are women. Sadly, there are some children in ASM too.

In Africa, women are involved in the production of diamonds, gold, coloured gemstones, cobalt, copper, the so-called 3T minerals (bearing tin, tungsten and tantalum), industrial minerals and construction materials, some of which they fashion into finished goods—from pottery and bricks to jewellery.

Given the speed with which the early stages of the AfCFTA are being rolled out and the expected elimination of tariffs on 90 per cent of goods produced by countries in the first five years, it is necessary to consider, even at this stage, the free trade’s potential impact on women in the mining sector – whether positive or negative.

A focus on such impact would help determine the achievement of the aspirations of the AU’s Africa Mining Vision (AMV) that was adopted in 2009, and seeks  “Transparent, equitable and optimal exploitation of mineral resources to underpin broad-based sustainable growth and socio-economic development…” and notably mentions gender inclusion as one of its key tenets, though the mechanics of that have yet to be worked out.

How can the AfCFTA achieve or improve on the aspirations of the African Mining Vision?

The African Mining Vision is premised on the understanding that women in mining in Africa are predominantly in ASM. The ASM world is precarious and fraught with low wages, exploitation and insufficient means of production, value chain marginalisation, and so on. Yet it provides livelihood opportunities for many women in rural settings.

It requires evidence-based thinking on the negative impacts of regional protocols on women and the measures needed to mitigate such impacts.

There was no formal consultation with women in mining during the processes that led to the development of the AfCFTA.

Writing on the issue of gender and the AfCFTA, Fatima Kelleher of the Nairobi-based women’s empowerment organisation FEMNET (also called the African Women’s Development and Communication Network) suggests that the trade agreement left the heavy lifting of gender inclusivity to countries. This is concerning because, in mining, gender and social inclusion have historically been low priority.

To examine the nexus between women in mining and the AfCFTA, it is important to understand the situation of women in the mining sector.

I would like to see a deliberate gender-inclusive effort in the formulation of AfCFTA protocols. This invariably means a consideration of the interests of the approximately five million women working in mining in Africa. Therefore, the following remedial actions are urgent:

First, women must advocate for the creation of space for their concerns to be taken on board. The opportunities in the AfCFTA can only be realized if there are evidence-based provisions in the protocols. These are best generated at the national and regional levels.

Second, Africa’s ministries of mining and trade must adopt a cohesive policy position on the optimization of the AfCFTA and the African Mining Vision. Governments need to address the siloed approach that is detrimental to optimal developmental outcomes.

Currently, governments are pushing for mineral beneficiation and value addition while the African Mining Vision is advocating mineral-based industrialisation. But how will this impact women involved in minerals trade on the continent? What will it mean for minerals whose value chains are linked to global value chains? What about the regional value chains and the setting up of national beneficiation and value addition industries?

Third, the AfCFTA can advance the aspirations of the African Mining Vision and gender inclusivity in the minerals sector by making sure that relevant AfCFTA protocols align with the vision’s key tenets. For example, the AfCFTA’s objective to “promote industrialisation, economic diversification and development of value chains” offers an opportunity for optimal participation of women for equitable benefits in the minerals value chains.

Fourth, another AfCFTA objective, which is to “liberalize exchange of service provision” between countries, can be advanced as countries develop mineral linkages that are key to the economic transformation of Africa.

In promoting the exchange of services between countries, the AfCFTA has an opportunity to bridge the gender gap in the minerals sector. There is a need for interventions that foster equitable access to skills development, which will equip women mining professionals and entrepreneurs to offer services like exploration, contract mining, laboratory services, and more.

Lastly, the institutional frameworks established for the implementation of the AfCFTA must include women at all levels, in line with the Maputo Protocol to the African Charter on Human and Peoples’ Rights on Rights of Women in Africa.

My message to development partners is for them to be mindful of the support required by women in Africa’s mining sector. Providing such support under the auspices of the AfCFTA will foster inclusion. 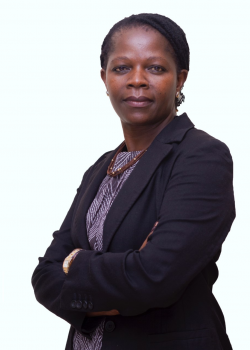