A Belarusian official and close ally of Belarusian President Alexander Lukashenko secured a raft of trade and business deals with Zimbabwe, touting them as a boon for Belarus.

Behind a veil of offshores, it was his own son and another well-connected figure who stood to gain from a controversial gold mining venture.

Sheiman has been one of Lukashenko’s closest allies ever since the 1994 electoral campaign that brought the strongman to power. While serving as Belarus’ prosecutor general in 2004, he was sanctioned by the EU over the disappearance of several prominent Lukashenko critics, and the U.S. followed suit two years later. 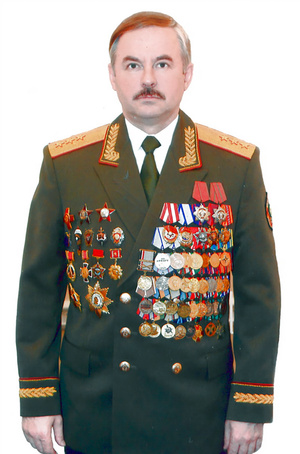 But he was under no such restrictions in Zimbabwe. After Sheiman returned from Harare, Belarus’s state-owned news agency said he had met with Zimbabwean officials to discuss “expanding economic cooperation” between the two countries, and that he had brokered an opportunity for “the creation of a mining enterprise.”

Sheiman told Belarusian state television that the trip had produced deals to explore for minerals such as gold, platinum, and rare earths through a joint venture in mining.

The mining deal was presented as a collaboration between the two countries, and Sheiman said it was intended to make “profit for Belarus.” But in fact, the new joint venture, Zim Goldfields, was secretly co-owned by Sheiman’s son, Sergei, with no stake for the Belarusian state.

Sergei Sheiman’s partner in the gold venture was influential Belarusian businessman Alexander Zingman, who has served as Zimbabwe’s honorary consul in Belarus since around early 2019. Zingman was also detained for 12 days this March in the Democratic Republic of the Congo. A press release by his Dubai-based company, Aftrade DMCC, specified that the reason for the incident was arms dealing allegations, which Zingman flatly denied. He was released without charge.

Documents from the Pandora Papers — a massive leak to the International Consortium of Investigative Journalists of nearly 12 million documents from 14 offshore corporate service providers, shared with media partners around the world — show how the two Belarusians used shell companies in the Seychelles and the U.K. to mask their involvement and the conflict of interest at the heart of the deal.

Thirty percent of Zim Goldfields was held by Zimbabwe’s state-owned mining company, the Zimbabwe Mining Development Corporation (ZMDC), but the other 70 percent was controlled by a U.K. shell company called Midlands Goldfields Limited.

Its ownership was masked by a proxy — U.K. records name Robert Michael Friedberg as the director of the company — but leaked documents from the Pandora Papers show that Friedberg was acting on behalf of its owners as a nominee for a Seychelles entity with a similar name: Midlands Goldfields Foundation. And that entity was owned by Sergei Sheiman and Zingman, who had both reportedly been part of the March 2018 mission to Harare.

Both shell companies appear to have been created specifically to take advantage of the opportunity afforded by Viktor Sheiman’s official visit to Zimbabwe: Midlands Goldfields in both the Seychelles and U.K. were incorporated just a few months before his trip, and Zim Goldfields was set up shortly after.

Vytis Jurkonis, a political scientist at Vilnius University and an expert on Belarus, called the arrangement an example of “nepotism” and a “conflict of interest.”

“I think it has all the signs of a really shady structure with direct links to the president’s administration,” he told OCCRP.

Sergei Sheiman and Lukashenko’s administration did not respond to questions sent by OCCRP. Aftrade DMCC, Zingman’s Dubai-based company, denied that Zingman had any involvement with the gold venture, despite his name, contact details, passport number and signature appearing in company records for Midlands Goldfields Limited.

Alpha Consulting, which set up Midlands Goldfields in the Seychelles, said it complies with all local and international regulations and runs background checks on its clients and the source of their wealth.

“Mr Zingman has no links whatsoever with either Zim Goldfields or Midland Goldfields Limited,” Aftrade DMCC said in a written response. “Mr. Zingman is also not involved in any business relationships or existing companies with Mr. Sergei Sheiman,” the company added in a separate statement.

Viktor Sheiman, who left his position as head of the Belarus President Property Management Directorate in June 2021 with a personal message of gratitude by Lukashenko for “opening the window to Africa,” did not respond to requests for comment sent through his former office.

Zim Goldfields obtained permits to prospect for gold on nearly 55,000 hectares in three locations, including a site along the Mutare River, a waterway in eastern Zimbabwe whose name means “river of metals.” The company was awarded a five-year “special grant” in May 2018 to mine for gold in a section of the river.

Credit: CNRGA mining pit at the Mutare River site where Zim Goldfields had a permit to extract gold.

Within months, the company was in trouble with Zimbabwean authorities. A December 2018 visit to the Zim Goldfields site, led by the Mines Ministry’s provincial leadership in Manicaland, reported the company had violated several safety regulations, though it is unclear whether any penalties were issued.

The Ministry of Mines, ZMDC, and Zim Goldfields did not respond to emailed questions sent by OCCRP.

In September 2020, the Zimbabwean government banned riverbed mining for environmental reasons. Both the Seychelles- and U.K.-based incarnations of Midlands Goldfields were shut down within days.

The joint venture agreement and articles of association gave the owners of Midlands Goldfields extraordinary freedom to obscure their interest in Zim Goldfields. The documents allow Midlands Goldfields to transfer its shareholding to “any partnership or other body whether incorporated or not” without the approval of its state-run partner ZMDC. 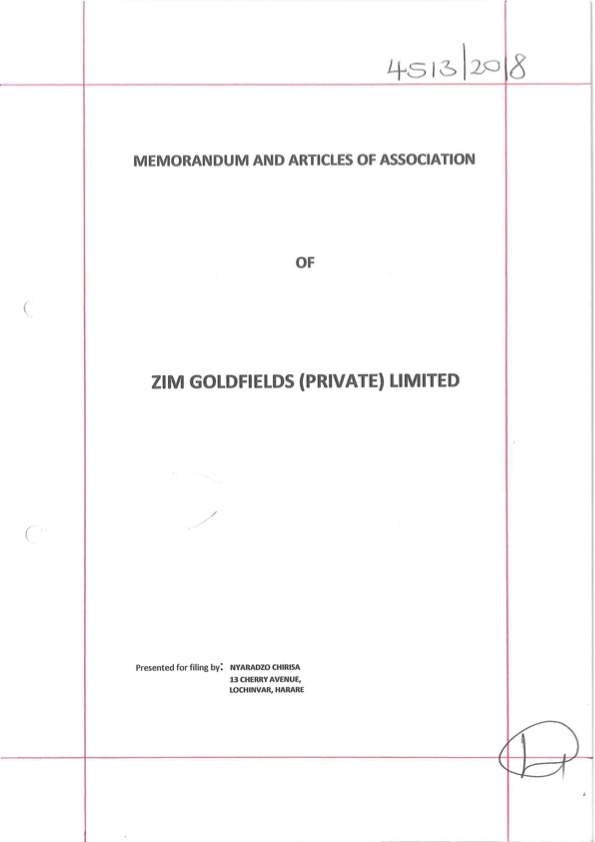 The agreement between ZMDC and Midlands UK to form Zim Goldfields as a joint venture. 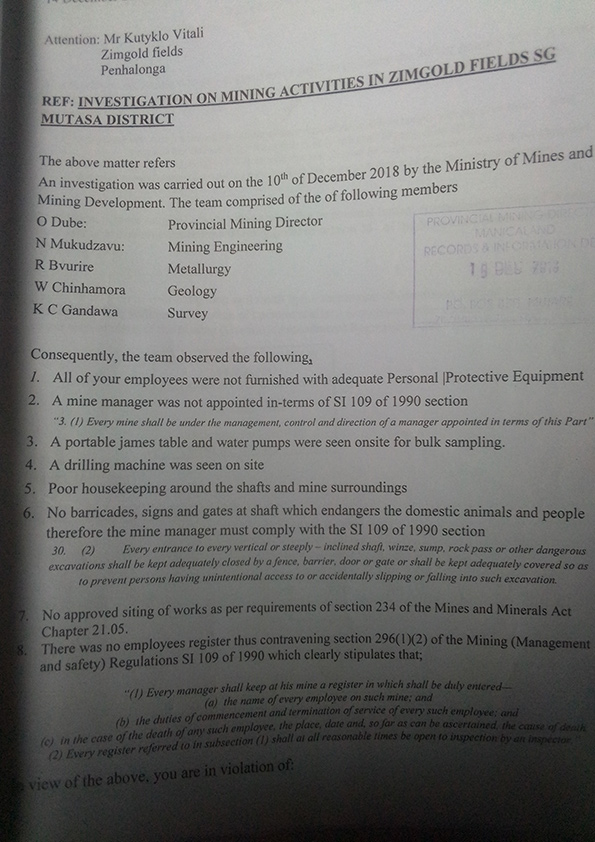 A December 2018 letter from Zimbabwe’s Ministry of Mines to Zim Goldfields about illegal mining on-site. 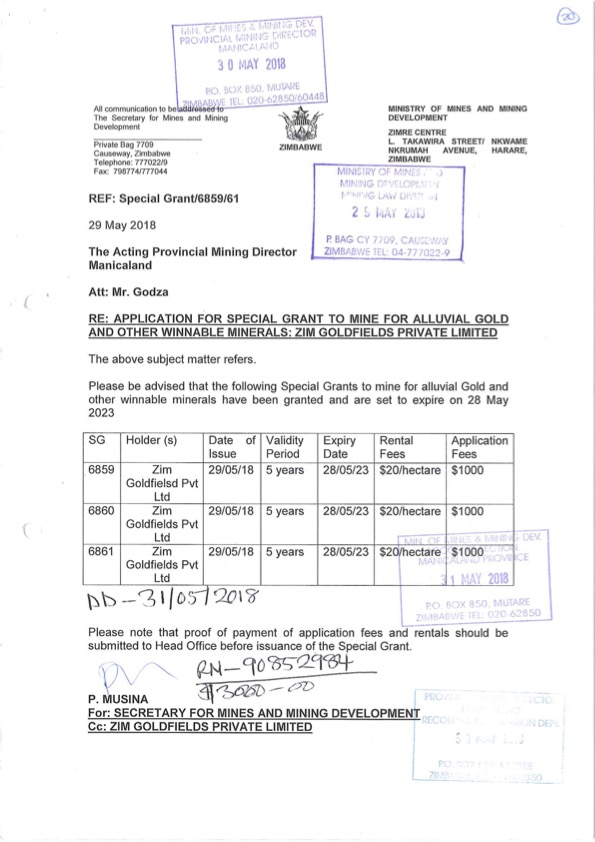 Special grant permits issued to Zim Goldfields in May 2018.

Zim Goldfields hired Belgeopoisk, a geological company that was formerly owned in part by the Belarusian state, to help its exploration activities. Now private, Belgeopoisk is part-owned by Zhouner, the Zim Goldfields director who signed its articles of association on behalf of Midlands Goldfields.

Belgeopoisk’s director Sergei Mamchik confirmed Belgeopoisk was working for Zim Goldfields, but said he had no knowledge of the company’s end beneficiaries.

“I don’t know and I don’t want to know,” he said in a phone interview.

Mamchik refused to disclose the quantities of gold discovered while working for Zim Goldfields. “Why do you want to know that? … It’s a trade secret,” he said.

While it’s not clear how much gold was extracted in the two years since the deal was signed, or whether the mining operation turned a profit, a former Zim Goldfields employee and a local community organization both said gold was discovered and sold from the site.

A Belgeopoisk document detailing the company’s operations for Zim Goldfields between 2018 and 2020 seems to corroborate this. The document states that 1,985 cubic meters of “gold-bearing sands” were excavated, of which 520 cubic meters were recovered.

A month earlier, Zim Goldfields had found itself at the heart of a controversy following media and local civil society reports of the deaths of two local miners on the company’s site. Zimbabwe’s Permanent Secretary for Information, Publicity and Broadcasting Services tweeted ten “illegal gold miners are feared to have been buried alive” at the site — which he attributed to “Zimgold fields” — and that two bodies had been recovered.

A local community organization press release blamed the deaths on a Chinese company subcontracted by “a Belarusian company,” but it named the Chinese party as “Zhondin Investments.”

Zim Goldfields and Sergei Sheiman did not respond to requests for comment on the reports.

In response to questions sent by OCCRP, including request for comment on the deadly accident, Aftrade denied Zingman’s involvement with Zim Goldfields and gave no specific comment about the November incident.

It is not clear whether Zim Goldfields continues to operate. The ZMDC did not respond to questions concerning the company’s status.