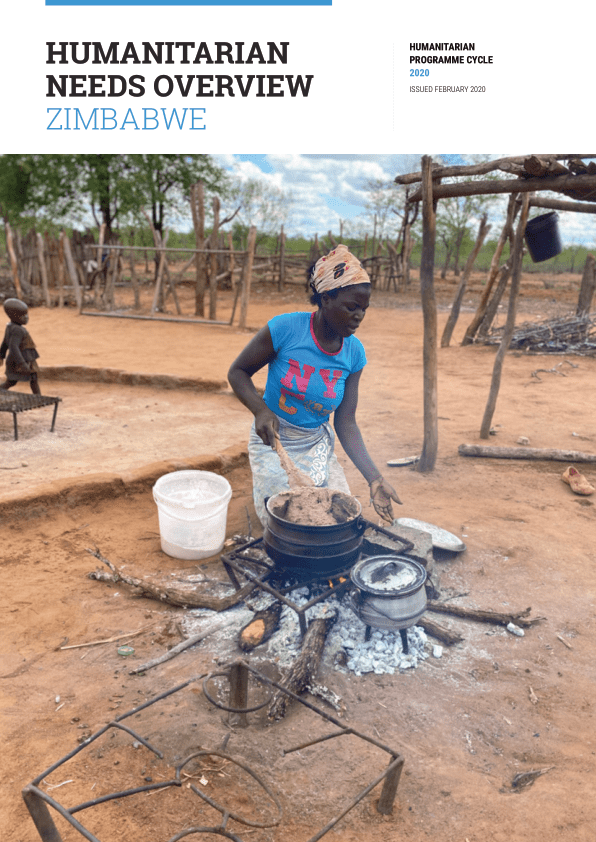 Humanitarian needs are rapidly rising in Zimbabwe—as a result of the devastating 2018/2019 drought, crop losses, economic shocks and the aftermath of Cyclone Idai—leaving 7 million people in urban and rural areas across the country in urgent need of assistance, compared to 5.5 million people in August 2019. Of these, 1.2 million people are facing life-threatening needs (related to critical physical and mental well-being issues) and a further 5.8 million require life-sustaining support (related to critical living standards issues). The primary drivers of the crisis are the severe drought of 2018/2019 and escalating macroeconomic challenges.

The country is facing its worst food security crisis in a decade, with almost half of the population considered to be food insecure. It is estimated that 6 million people are now severely food insecure (IPC phase 3 or higher), including 4.3 million in rural areas, and 1.7 million in urban areas. Rising food insecurity, coupled with high food prices, has increased nutritional needs. Over 1 million children and women require nutrition assistance, including approximately 95,000 children under age 5 who are acutely malnourished (3.6 per cent of children under age 5).
This is the highest level of acute malnutrition seen in recent history in the country.

The combination of climatic and economic shocks has left at least 1.3 million people—mostly women and girls—at risk of gender-based violence (GBV), and 1.2 million children in urgent need of protection support. Women and girls are having to travel longer distances to access clean water, increasing the risk of GBV, while early marriage is reportedly being used as a coping mechanism by over-stretched families. Violence and discrimination related to the emergency has also exacerbated pre-existing gender and social inequalities, as well as traditional harmful socio-cultural practices. Women and girls with disabilities are among the most vulnerable and are three times more prone to GBV and harmful practices. 2019 saw a 24 per cent increase in reported child abuse cases and a 20 per cent increase in reported child sexual abuse cases compared to 2018.

Ten months after Cyclone Idai hit Zimbabwe, 128,270 people remain in need of humanitarian assistance across the 12 affected districts in Manicaland and Masvingo provinces, particularly in the districts of Chimanimani (14,839 individuals), Chipinge (63,245 individuals) and Buhera (8,565 individuals). In January 2020, Manicaland province was impacted by violent windstorms, significantly increasing damage to houses already hit by Cyclone Idai. Households which only received emergency shelter (tarpaulins) are now uninhabitable, while some families are staying in makeshift structures. Relocation of IDPs is not feasible in the short term and it is anticipated that at least 950 IDPs will remain in the camps for the next 6 to 12 months.

There are 21,328 refugees and asylum seekers in Zimbabwe who need international protection and multisectoral life-saving assistance to enable them to live in safety and dignity. This includes 14,782 refugees residing in Tongogara camp in Manicaland province, and 6,546 Mozambican asylum seekers profiled but not yet biometrically registered who are living among Zimbabwean host communities in Manicaland province. Displacement from eastern Democratic Republic of the Congo (DRC) into neighbouring countries is expected to continue, with a projected arrival rate into Zimbabwe of 200 persons per month.

The humanitarian situation in Zimbabwe is expected to deteriorate in 2020, with food insecurity and other needs likely to rise. Most of the country has received little to no rainfall to date, resulting in significantly below-normal cropped areas, permanent and near-permanent crop losses, persistent water and pasture challenges, and continued cattle deaths. In addition, Fall Armyworm has been reported in many locations, while African Armyworm has been reported in parts of the Midlands Province.2 Average to below-average rainfall is forecasted for the remainder of the 2019/2020 planting season and beyond, increasing the probability of below-average harvests. Meanwhile, most markets across the country have very little to no maize grain and national maize grain supply is critical.4 At the same time, social services and social safety nets are likely to be further strained, and communities across the country have had their ability to cope exhausted by back-to-back shocks. The risk of communicable disease outbreaks (especially cholera) remains very high due to the deterioration in WASH standards and infrastructure, while Zimbabwe’s high exposure to natural hazards —including cyclones, floods, heavy rains and drought —means that another natural disaster may occur, potentially causing displacement.