English Situation Report on Zimbabwe about Agriculture, Food and Nutrition, Drought and Epidemic; published on 21 Jan 2022 by WFP 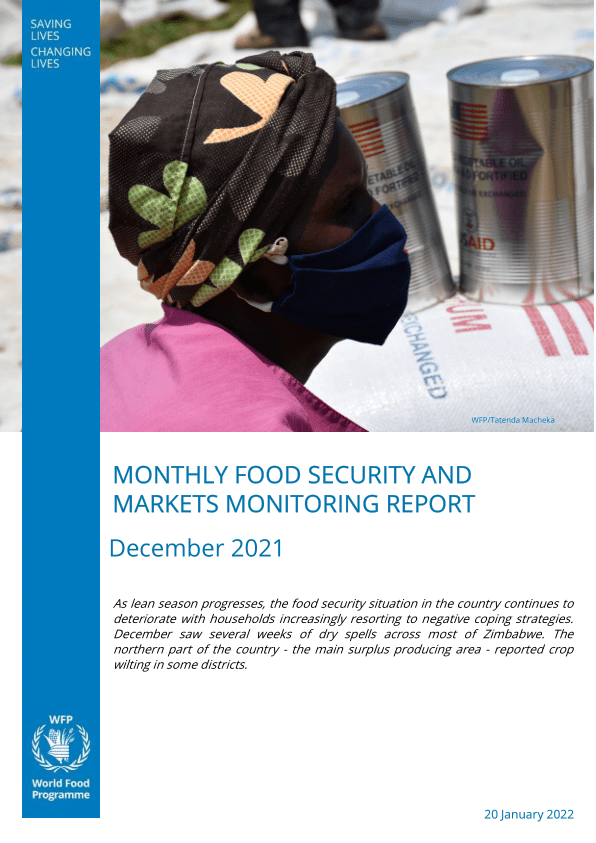 The COVID-19 situation in Zimbabwe deteriorated during the month of December, with the country experiencing its fourth and biggest wave of cases triggered by the emergence of the highly infectious variant Omicron. The country recorded 74,212 new cases, the highest increase since the start of the pandemic and 297 deaths during the month of December, up from 1,249 new cases and 30 deaths reported during the previous month. Unvaccinated citizens are being encouraged to get vaccinated, while those fully vaccinated are being offered booster shots.

Rainfall received in the northern parts of the country, which host the main surplus producing areas, remained below normal. Long dry spells experienced throughout most of the country in December resulted in wilting of crops in some areas and farmers were encouraged to replant, some however reported facing challenges in accessing inputs. The latest WFP 10 day rainfall outlook i.e. until 20 January 2022 predicts normal to below-normal rainfall across most of the country, with some parts in the north-east and south-west likely to receive above normal amounts.

The food security situation in the country continued to deteriorate due to constrained household food availability and access as a result of depleted household stocks and limited livelihood options. In December, an estimated 5.9 million people reported insufficient food consumption. The estimated number of people employing ‘crisis and above’- level food-based coping strategies increased from 9.3 million people in November to an estimated 9.6 million at the end of December 2021, which is typical during the lean season when households increasingly rely on markets.

Annual headline inflation marginally rose from 58% in November to 61% in December 2021, while monthly inflation has increased by 6% for the last three consecutive months.

Maize grain availability remained low – the commodity was reported available in only 6% of all monitored rural and urban markets. While low market availability is typical during the lean season, it has been further reduced due to centralised marketing enforced by the government with the Grain Marketing Board (GMB) being the only authorised dealer. Maize meal was available in 86% of urban markets, while in rural areas availability increased from 43% of monitored markets in November to 58% in December.

In USD terms, the average price of maize grain, maize meal, sugar beans and vegetable oil remained stable compared to November; the price of kapenta increased by 27% in rural markets.