BIKITA, Zimbabwe — Nothing seems to happen at the right time for Maria Mazambara, a communal subsistence farmer in Bikita, one of Zimbabwe’s southernmost rural districts. 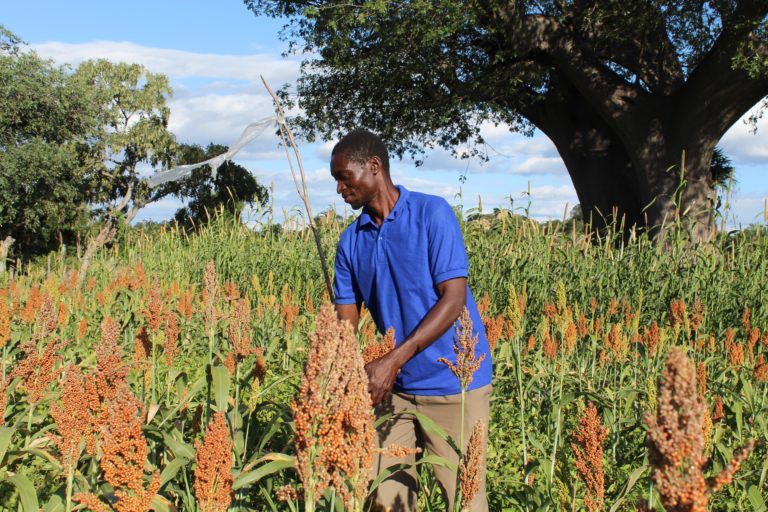 Onias Machono from the Dende farmers’ club in his millet and rapoko crops where he’s set up a scarecrow to fend off the quelea weaver birds. Image courtesy of Tatenda Chitagu.

“The seed we get from government’s input scheme is usually delivered to us late in the season,” she says. “And when we do receive it, the rains are too little to sustain my maize crops and it wilts at the [final] tasseling stage. Sometimes the rains are just too much and we have floods. It’s always a case of so near, yet so far.”

This has left Mazambara and her family, in a dry region that receives low annual rainfall, as candidates for food aid.

“Representatives of humanitarian agencies that give us food handouts now know me by name,” she says in a worried tone.

While Mazambara isn’t alone in this predicament, most communal farmers from Bikita continue to grow hybrid maize, year in and year out.

At the turn of the new millennium, rural farmers from the area, as well as most of Zimbabwe, opted for hybrid maize, a seed developed by companies such as Pannar and SeedCo, that are short-season, high-yielding varieties. Maize has been a part of Southern African food systems and local knowledge for three generations, though the hybrid variety was introduced just a few decades ago because of droughts and changing weather patterns.

To date, however, it’s a seed that hasn’t adapted well to the region’s poor soils, dry climate and now extreme weather patterns caused by climate change. Some farmers now see it as a source of food deficiency and financial malaise in their villages. Hybrid maize seeds cost them about $30 for a 10-kilogram (22-pound) bag every season. Due to the difficulty of growing it in Bikita’s dry soils, farmers must also buy artificial fertilizers, which cost more and further degrade their soils.

“Traditionally we were growing small grains like pearl millet, sorghum, rapoko and svoboda, among others,” says Muchazondida Charingwa, headman under chief Mukanganwi in Bikita. “Our grandparents grew these small grains and I am sure they would know that this place is not fit for hybrid maize. But with modernization, people have now shifted to [hybrid maize].”

At a crossroad between seeds

Growing small traditional grains like millet, sorghum and the native rapoko, svoboda and other small pulses is labor-intensive right from land preparation. Farmers need to sow the dry fields and then transplant the seedlings in the fields. Fields need to be weeded several times a cycle, then at harvest, the crop needs to be thrashed thoroughly for an entire day of winnowing. After this, farmers will then pound the seed again and manually grind it into flour. Another challenge comes from the quelea weaver birds.

“We stand guard and use scarecrows to fend the birds off, otherwise they will eat everything,” says Benjamin Mutema, village head of Mushanjire in Bikita.

He adds the small grains don’t yield much crop residue, which is needed by the smallholder farmers for animal feed, composting and crop manure to fertilize the soil.

But when faced with the costs of habitual food shortages by continuing to grow hybrid maize, Mutema says it’s a tough choice between small grains and hybrid maize.

“Slowly, people are realizing that it is better to revert to the small grains, even though it is laborious,” he says. “They are better than continuing to grow hybrid maize which fails. We got the rude awakening after two organizations conscientized us on the need to go back to growing small grains, as well as old, traditional maize as opposed to hybrid maize.”

In 2014, a community project in the four wards of Bikita began an initiative to reintroduce the farming and popularization of old varieties of maize, millet, sorghum, rapoko and pulses. Led by an agroecological organization to revive seed diversity, the Earthlore Foundation, and a partnership with a farmers’ representative organization, the Zimbabwe Smallholder Organic Farmers Forum (ZIMSOFF), members of the community held open dialogs and discussions with elders.

Together, the goal is to rediscover indigenous seed varieties, stop land degradation, and implement a method that works for Bikita’s soils and a changing climate.

“We are working with 220 farmers split among different communities and bound by cooperatives in community gardens,” says Method Gundidza, the Earthlore director. “We have brought back several seeds like the traditional svoboda, which remained with one elderly woman who was no longer planting it, as well as a tuber called tsenza that grows on wetlands.”

The locals have since expanded the area on which they grow millet. The project is currently in the process of ascertaining the actual acreage under small grains, Gundidza says, but more still needs to be done to get people to change their dietary habits to small grains.

“There is lack of government support in Zimbabwe for production, processing, and use of crops that are ecologically compatible with semi–arid areas,” he says.

Governments in Africa need to finance research for cultivating varieties of small grains that are higher-yielding and better-tasting for them to be acceptable on the market, says Heink Hobbelink, an agronomist and coordinator at GRAIN, an organization that supports small-scale farmers.

“There should be much more research and investment to create small grain varieties that are better adapted to small farmers’ needs,” Hobbelink says. “And the government should stop pushing hybrid maize and the seeds companies behind them, as now happens in many places in Africa.

“On the consumption side, currently in Africa there is a tremendous expansion of the Western supermarket system with all their ultra-processed and unhealthy foods that is detrimental to healthy consumption habits, including those of small grains.”

Stancilae Tapererwa, acting chief director of agricultural services at Zimbabwe’s agriculture ministry, says the government has incentivized the growing of small grains by increasing the price paid per yield compared to that of hybrid maize.

The national grain reserve buys small grains such as sorghum, pearl millet or rapoko at the equivalent of about $350 per ton, compared to less than $300 for maize, Tapererwa says. “This is a way to encourage growing small grains.”

He adds the government has also introduced a national program called Pfumvudza to advocate for conservation farming and push hybrid maize production in high-rainfall areas, while small grains are preserved for low-rainfall areas.

To avoid seed shortages, Earthlore and ZIMSOFF hold seed and food fairs where the 220 farmers from Bikita can exchange, buy or sell their seed varieties, as well as network, connect and exhibit their efforts. The exhibitions aren’t limited to the district; some are also held in the capital, Harare, where smallholder farmers from across Zimbabwe display their wares.

The farmers say they now not only appreciate growing small grains, but also prepare their traditional maize seeds at home, instead of buy hybrid seeds.

“Small grains and traditional maize seed varieties, unlike hybrid seeds, are drought-tolerant and can withstand the heat in this area. Even if you do not get a bumper harvest, you are assured of some yields. Hybrid maize mostly fails here,” he says, pointing to a patch of land where he planted hybrid seeds.

“Last year, we used hybrid seeds and had food shortages. They do not grow here as our soils are degraded. Our home-prepared seeds are doing better.”

Makazinge says the journey to revive small grains and traditional maize seed varieties hasn’t been easy because they’re scarce and the degraded soils affect the quality of seeds used in the next season.

Challenges especially exist with older maize varieties. If there’s a drought, these home-prepared seeds are destroyed and the community’s seed bank runs dry. In one season, farmers can recover a variety and lose it the next due to drought or flood, making it precarious to use in the face of climate change. That makes establishing a secure backup of seeds yet another challenge to be surmounted.

To prepare their own maize seeds, the farmers take seeds from the best yield and smoke them, but don’t shell them. They then wrap them in mango leaves and store them in a granary or kitchen hut.

Erina Sarafu, a farmer from the Kumboedza farmers’ club, said they’ve embraced different farming practices that don’t degrade the soil. In her field, she digs contour ridges and infiltration pits to harvest water and capture moisture.

ZIMSOFF co-coordinator Oliat Mauramba says they encourage their members to live and work in harmony with nature.

“We urge farmers to produce organically, to take care of the environment and respect Mother Earth. Instead of artificial fertilizers, farmers should use what is readily available, like cow dung,” he says. “We are trying to shift from the new system of chemicals and go back to the organic fertilizers which our forefathers were using.”

But not all farmers in the area are willing to switch to traditional seeds. Some have enough money to keep buying hybrid seeds and fertilizer, or else are skeptical of the shift to small grains, which are often viewed as “poverty crops” because they’re usually donated as food aid during floods and droughts. Others have simply resigned themselves to the new normal.

“There are other people of means who can afford to buy inorganic fertilizers from shops as well as hybrid seeds,” Mauramba says. “They do not opt for farmer-saved seeds or small grains. Other villagers get hybrid seeds from our government input schemes.

“While the government also gives small grains, there are fewer than hybrid maize,” he adds. “We are lobbying the ministry of agriculture to further increase the allocation of small-grain seeds to semi-arid areas like ours which receive low rainfall.”