Nearly a decade ago, poachers used cyanide to slaughter more than 135 elephants for their ivory in and around Zimbabwe’s Hwange National Park. 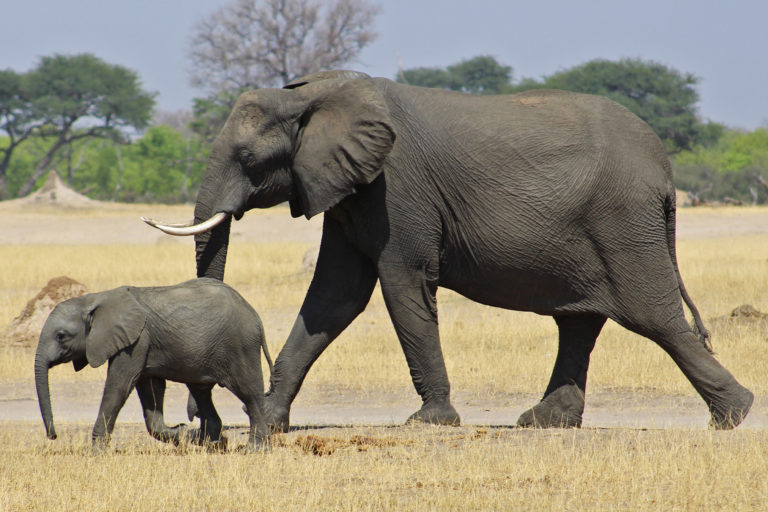 In the wake of these poisonings, the Southern African country tightened its laws to prevent similar deadly attacks on its wildlife.

A new study shows that, even as international demand for ivory fuels poaching across the continent, this pivotal change to Zimbabwe’s Environmental Management Act in 2018 — combined with efforts to stop poaching before it happens through the improved use of informers — is helping to cut elephant poaching in the country.

Under the revised law, it’s no longer essential for prosecutors to establish that an exact concentration of cyanide was used in a wildlife poaching case. “Now you can prosecute people on the basis of intent to use poison maliciously,” says Richard Hoare, a Harare-based conservation consultant and lead author of the study published in the African Journal of Wildlife Research.

“Previously, if prosecutors weren’t able to produce evidence of a dead animal, the magistrates would just convict people of illegal possession of a dangerous chemical without a permit,” Hoare says.

That allowed suspects to get off lightly, with just a fine or community service.

Cyanide is used in Zimbabwe’s mining industry, and its distribution is supposed to be tightly restricted. But small tablets can be obtained fairly easily by civilians planning to poach.

“Small amounts of cyanide powder easily go missing from the large stocks held in some mines and enter the illegal supply chain for wildlife poisoning,” the study notes. “Even some steep price inflation along this chain is offset by the potentially large financial rewards gained from ivory poaching.”

The chemical is a highly effective weapon in the hands of a poacher, who doesn’t need a firearm, the skill to use one, or even the backing of a powerful poaching syndicate. Poisoned bait, such as salt mixed with cyanide, can be laid at a waterhole where herds of elephants gather, or along regular routes that they use to get there, and the elephants that eat it die quickly within a few meters of the trap.

Other wildlife, including critically endangered vultures, also fall victim to cyanide poisonings, so the tightened legislation also benefits them.

The 2013 Hwange poisonings led to 219 vulture deaths. While the vultures were collateral damage in Hwange, elsewhere they have become the main target.

In August this year, 108 critically endangered white-backed vultures (Gyps africanus) were killed by poachers who laced a buffalo carcass with poison in South Africa’s Kruger National Park. The poachers were after vulture body parts to sell as charms on the illegal fetish market.

In Zimbabwe, proactive steps to prevent poison from being deployed in the first place is playing an increasingly important part in curbing wildlife crimes. These include schemes to secretly pay informers.

“These schemes have got to really be under the radar. And that money has to be kept very quiet, because the people providing the information are taking big risks themselves,” Hoare tells Mongabay. “My impression is that the use of intelligence has been massively increased. That’s what’s keeping poaching down at the moment.”

This is corroborated by Trevor Lane, one of the co-founders of the Bhejane Trust, a conservation nonprofit. The group works closely with the Zimbabwe Parks and Wildlife Management Authority (ZimParks) and the Zimbabwe Republic Police (ZRP) to conserve wildlife and combat poaching in Victoria Falls National Park and the Sinamatella area of Hwange National Park.

“Good intelligence is absolutely critical,” Lane tells Mongabay. He says the National Parks Intelligence Unit in Hwange has been very successful in recent years on the back of better intelligence. This has resulted in a dramatic drop in poaching.

“I pay out the informer rewards so am very up to date on what is happening, and the Parks Intelligence Unit and the Minerals Flora and Fauna Unit of the ZRP are still producing great results,” he says. “Commercial poaching in Zimbabwe is at an all-time low.”

ZimParks spokesman Tinashe Farawo says this year is the third in a row with no cases of elephant poaching around Hwange National Park.

He attributes the decline to the existence of tougher laws like the amended environmental management act, as well as mandatory nine-year jail terms for ivory poaching, all of which act as deterrents.

Communities living close to wildlife are the “first line of defense” in anti-poaching work, he says.  “They are now assisting us in a big way.” While there have been no recorded elephant poaching cases since 2020, authorities continue to arrest would-be poachers outside of the park, recording 19 arrests in 2020 and 16 in 2021 according to figures viewed by Mongabay.

But while the study authors say that Zimbabwe’s comprehensive laws against illegal wildlife killing are adequate, there are still gaps in enforcing them.

Few understand this better than Ever Chinoda. A former state prosecutor who has also worked as a legal officer for the state wildlife authority, Chinoda is the founder and director of Speak Out for Animals (SOFA), a Zimbabwean NGO.

In 2019, SOFA received funding from the U.K.’s Department for Environment, Food and Rural Affairs to work with Zimbabwean police, national parks, prosecutors and magistrates to build watertight cases and pursue deterrent sentences for the perpetrators of wildlife crime.

“Before we started doing case monitoring and training in wildlife law, magistrates and prosecutors had an attitude towards wildlife cases,” Chinoda says. “A magistrate and a prosecutor would rather adjudicate a case involving shoplifting of a lollipop in a supermarket than to prioritize [illegal] possession of an animal.”

In the last three years, however, Chinoda says she and her team have witnessed progress, which she attributes to tougher laws as well as increased public awareness about the value of wildlife. Before SOFA’s intervention, it would take up to a year for a court to conclude a straightforward case involving, for instance, the poaching of a warthog, which is an abundant species. Those timelines have now been reduced to just three months.

Magistrates are also regularly handing down mandatory nine-year jail terms against poachers who kill any of Zimbabwe’s nine specially protected animals, which include black and white rhinos, cheetahs, and wild dogs. Critically, the impact of tighter regulations against wildlife poisoning is also evident.

Chinonda says that poisoning cases, which were once common, appear to have declined dramatically since the law was changed in 2018. Neither Chinoda nor study co-author Divine Chakombera have records of prosecutions under the new law, which Chinonda says can be seen as a sign that it’s working.

“When people know that this particular crime attracts a heavy sentence,” she says, “it would definitely deter people from committing the offense.”