Zimbabwe beat Pakistan by one run after a thrilling encounter in the crucial Group Two match of T20 World Cup 2022. The national team's batsmen also failed to achieve the meager target of 131 runs set by Zimbabwe. 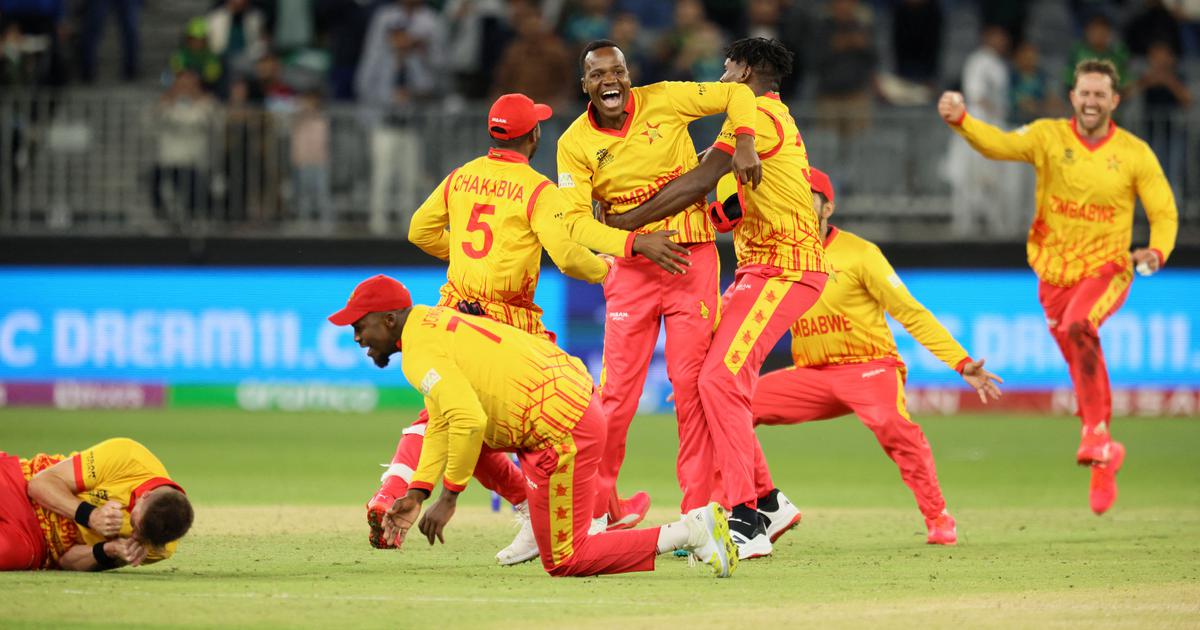 In this match being played in Perth, Zimbabwe’s captain won the toss and decided to bat first.
Batting first, Zimbabwe scored 130 runs for 8 wickets in the allotted 20 overs.
The national batsmen were in trouble from the beginning in chasing the target and the national batsmen kept losing wickets at regular intervals.

The national team lost only 6 wickets for 95 runs, but in such a situation, Muhammad Nawaz and Muhammad Wasim tried to bring the team closer to the target, in which both were quite successful, but Muhammad Nawaz played a big shot in the last over. Failed in the attempt and got out.
The team needed 3 runs off the last ball to win, so Shaheen Afridi was run out trying to score the second run and thus Zimbabwe won the match by one run.

It should be noted that this is Zimbabwe’s second win against Pakistan in T20 Internationals.
On behalf of Pakistan, Shan Masood scored the most 44 runs and Muhammad Nawaz played an innings of 22 runs, while no other player could show sufficient performance.

Sikandar Raza proved to be the turning point of the match for Zimbabwe, who changed the direction of the match by taking 3 important wickets for 25 runs in his 4 overs. Apart from them, Brad Evans dismissed 2 players while Blessing Mozarbani and Luke Jongwi got one wicket each.

Sikandar Raza of Zimbabwe was adjudged Man of the Match for his excellent bowling performance. Earlier, the Zimbabwean batsmen gave their team a quick start, but Haris Rauf gave Pakistan their first win in the fifth over. Harris caught Craig Irvine for 19 for 42. While in the very next over, Mohammad Wasim broke the speed of Zimbabwe by also getting out lbw to opener Esley Madhevir.

The Zimbabwean team scored 47 runs for the loss of 2 wickets by the end of the Powerplay. Zimbabwe were bowled out for 64 runs by Milton Shamba for their third loss, but Sikandar Raza and Shaun Williamson got their team back on track.

Pakistani bowlers once again used their experience and managed to take 4 more wickets in a row at a score of 95.  First, Shadab Khan took two, then Muhammad Wasim Jr took two wickets to put Zimbabwe on the back foot.

After that, Ryan Brill and Brad Evans added valuable runs for Zimbabwe by forming a partnership of 31 runs for the eighth wicket, but due to the poor bowling of the Pakistani bowlers, the Zimbabwean team could score 130 runs for the loss of 8 wickets in the allotted 20 overs.

On behalf of Pakistan, Mohammad Wasim Jr. was the most successful bowler by taking 4 wickets, Shadab Khan was able to dismiss 3 players while one wicket went to Haris Rauf.
…..