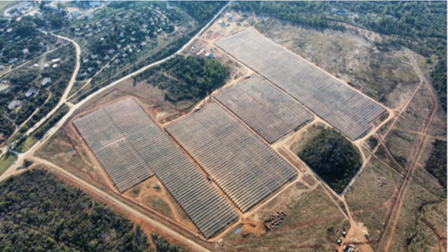 This increase in the usage of diesel was due to frequent power outages and unstable supplies from ZESA, the national electricity utility company, which led to increased use of diesel-generated electricity. The Blanket Mine has installed 18 MVA of standby diesel generators. Blanket Mine’s 2021 ESG Report says that the mine consumed 3,984,756 liters of diesel in 2021 and its total electricity consumption from the grid was 79,865,052 kWhs last year.

Caledonia says during outages or periods of low voltages, the power supply at Blanket has to be supplemented by standby diesel generators to enable uninterrupted mining and capital operations. Diesel-generated electricity is expensive, subject to an unpredictable supply of diesel and creates an unfavorable environmental footprint.

Recognizing these economic, environmental and logistical challenges of running large-scale diesel generators for extended periods, Caledonia started constructing the 12.2 MWac solar plant late in 2021. The 12 MW plant which was switched on yesterday will be able to meet Blanket’s minimum electricity demand during daylight hours. The plant will also cater to about 27% of Blanket’s total electricity requirement during an average 24-hour period. Blanket Mine will continue to rely on the grid and generators to provide additional power during daylight hours and at night.

In a bid to reduce emissions and production costs even further, Blanket has already started the evaluation of the next phase of the solar project provide. The proposed expansion will able to meet Blanket’s peak demand during daylight hours. Blanket says that this will require an agreement between the company and Zimbabwe authorities regarding the treatment of the surplus power that will be generated by the larger plant. They are also looking into the feasibility of adding battery storage.

“I am delighted that the solar plant is connected to the Blanket grid and from today Blanket will start to receive some of its energy directly from solar. With 21% of Blanket’s on-mine costs relating to energy usage, this solar plant is a very important project for the Company as it will improve the quality and security of Blanket’s electricity supply and provide environmental benefits through cleaner energy.  The solar power will displace more expensive power from the grid and from the diesel generators and is expected to reduce Caledonia’s consolidated cost per ounce of gold produced by approximately $37.”

It’s really good to see more large energy consumers in Zimbabwe and the region going solar, especially in the mining sector. Across the border in South Africa, The SOLA Group and African Rainbow Energy recently reached financial close on 200 MW of solar PV projects for Tronox Mineral Sands. The construction of the 50 MW Khanyisa solar PV plant at Gold Fields’ South Deep Mine in South Africa has also just been completed. The R715 million ($38 million) solar plant will enhance the sustainability of South Deep and contribute to Gold Fields’ long-term commitment to Net Zero. Gold Fields is aiming for 30% of renewable energy by 2030 and to be carbon neutral by 2050. South Deep currently consumes around 494 GWh of electricity per year, which represents 10% of the mine’s annual costs and 93% of its carbon emissions. South Africa’s grid is mostly powered by coal.

Zimbabwe has an installed capacity of about 2,300 MW, but about 1,000 MW of its generators have been unavailable for a while now, resulting in the utility company being forced to implement load shedding. South Africa has an installed capacity of about 50,000 MW, but all too frequently about 15,000 to 17,000 MW of this capacity is unavailable due to a mix of breakdowns and planned critical maintenance. With both Zimbabwe and South Africa experiencing their worst ever periods of load shedding, incorporating large distributed renewable energy projects coupled with large scale battery storage for large energy consumers has become critical. It is the quickest way of adding capacity to help alleviate the excessive load shedding that is hampering operations and increasing production costs.