The 2023 Climate Story Lab ZA is excited to announce that nine creative projects from five African countries have been selected to participate in the Lab. The 4-day residential lab brings together climate experts, activists, and creatives to develop powerful stories and build engagement strategies to inspire meaningful action to address the climate crisis. 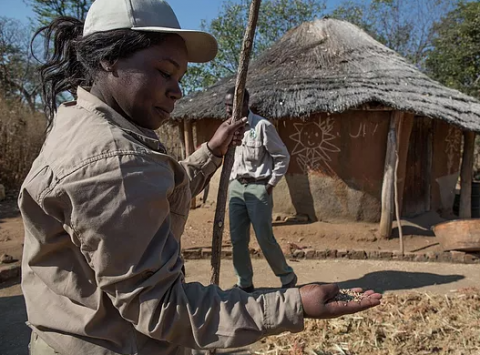 Four projects were selected from South Africa, one from Zimbabwe, the Democratic Republic of Congo, and Mozambique, and a collaboration between SA and Zimbabwe as well as a South African team working in Uganda.

“We were struck by how many projects we received and how diverse they were in genre and creative approach. It’s clear that creatives are committed to addressing the climate crisis, in many instances without much institutional support,” says Miki Redelinghuys, CSLZA co-director and impact producer.

Selected projects that will attend the Lab in Cape Town, South Africa in January 2023 are:

The Zimbabwean project Chikukwa Custodians tells the story of Zeddy Chikukwa’s quest to regenerate indigenous practices of food growing in a remote mountainous region of Zimbabwe. The short documentary is produced by Mycelium Media Colab (South Africa/ Zimbabwe) and directed by Jacqueline van Meygaarden with the support of Rumbi Katedza as Zimbabwean co-producer.

The other Zimbabwean project is a film set in the mystical Nyami Nyami region near Lake Kariba, The Conservationist tells the powerful story of Moreangels Mbizah, who has dedicated her life to restoring the balance between rural communities and nature. This is a documentary feature film by Mai Jai Films (Zimbabwe) directed and produced by Rumbi Katedza and co-produced by Siza Mukwedini.

Burning Rebellion by Well Worn Theatre Company (South Africa) is an ecological protest poem that gives voice to a profound sense of injustice, a rightful rage, and a fear of what is to come. Represented by Kyla Davis and Sanelisiwe Yekani (Directed by Joni Barnard featuring and written by Sanelisiwe Yekani, Lerato Sefoloshe, Mlindeli Zondi, Jaques De Silva, and Kyla Davis).

A thrilling podcast series from the DRC – Congo en Panne by Radio Workshop follows the devastating impact of the Inga dam development for hydroelectricity on local communities. This four-part narrative series tells stories at the intersection of energy generation and human rights. Bob Yala is the lead reporter and producer, working with Amélie Guyot-Staal as impact support.

Forest Spirits of AZIBO (South Africa), is an original African folk tale physical theatre storytelling experience created and directed by Naledi award-winning artist, Menzi Mkhwane performed by Sbusiso Mnqobi Mhlongo and Andile Vilakazi. The village AZIBO lies near a sacred forest, which comes under threat when a factory seeks to expand. The work is designed to teach a young audience (aged 7-13) about the climate crisis.

Namaqua – The Green Frontier is a short documentary film that tracks the impact of mining for green energy in the Northern Cape, South Africa. Directed by Haroon Gunn-Salie who collaborates with producer Alexandria Hotz from WoMin African Alliance, the film tells the story of the brave Namakwaland women who lead the charge against transnational corporations and the state.

Nakhodha and the Mermaid is a Virtual Reality (VR), mixed media project by YC Productions (Mozambique) with Yara Costa as creative director. This is a climate change story told through a love-chanting affair between a dhow sailor, the Nakhodha, and a mermaid, drawing attention to the imminent threat of rising sea levels that can destroy the coastal fishing communities.

Ada’s Harvest is a story of stubborn optimism. The 104-year-old Ada worked hard to make sure her son is educated. Today this is paying off as Prof Adipala leads a pan-African research team that seeks to marry science and traditional knowledge to build resilience against the climate crisis and find pathways to feeding the world. Filmed in Uganda by South African filmmaker, Jo Higgs, the feature documentary is produced by Liezel Vermeulen.

Ulwandle Lushile – Meeting the tide is an intimate short documentary about a group of fisherwomen in rural KwaZulu-Natal, who live on the doorstep of the world-renowned Isimangaliso Wetland Park. The film is directed by marine scientist, Tembisa Jordaan, who invites the women to share their indigenous knowledge and stories of survival amidst dwindling marine resources.

“Creative storytelling is a driving force of change and our intention is that the projects selected will help communicate the crisis and support movement building,” says Anita Khanna, CSLZA co-director and climate activist.

For more information go to: https://climatestorylabza.org/