Harare has barred exports of the metal – used in electric-vehicle batteries – in its raw form as part of efforts to have it processed locally.
Bikita Minerals’ lithium mine in Masvingo province, Zimbabwe. Chinese firm Sinomine Resource Group acquired Bikita Minerals in January. Photo: Handout

Chinese companies that have made multimillion-dollar acquisitions in Zimbabwe will have to build lithium processing plants after the southern African nation banned the export of the metal in its raw form.

Companies must either set up local processing plants or provide proof of exceptional circumstances – and receive written permission from the government – before lithium can leave the country.

Zimbabwe is estimated to have the largest unexploited reserve of lithium in Africa and is the sixth-largest producer in the world. It imposed the export ban last week, as part of efforts to have lithium – the key raw material in electric-vehicle batteries – processed locally.

The government also wants to stop artisanal miners who reportedly dig up and take the mineral across borders. Harare says it has lost US$1.8 billion in mineral revenues due to smuggling, artisanal mining and externalisation to South Africa and the United Arab Emirates.

“We saw the same example with Indonesia with nickel and Chile even tried to build a deeper lithium supply chain several years ago, though those circumstances were different and the country didn’t attempt to ban lithium exports, but instead levied huge royalties on lithium producers in the country,” Berry said.

Chinese firms that had made recent lithium investments in Zimbabwe would need to build processing facilities there at a cost of hundreds of millions of dollars so they can export higher value lithium chemicals, he said.

“There is a great deal of capital required to build chemical conversion facilities outside of China, not to mention the two- or three-year lead time necessary to actually complete construction and commissioning,” he said.

Berry added that if more countries followed suit, it could have wider implications – such as higher prices for lithium and other raw materials such as cobalt.

Lithium prices have surged by about 1,100 per cent to a record in the past two years, with supply struggling to keep up with high demand. Lithium carbonate spot prices in China – the world’s biggest electric-vehicle market – climbed to a record US$84,000 per tonne in November, according to Benchmark Minerals’ lithium price index.

In the past year, three Chinese companies – Zhejiang Huayou Cobalt, Sinomine Resource Group and Chengxin Lithium Group – have acquired lithium projects in Zimbabwe worth a combined US$679 million, amid the worldwide race to go green.

Huayou Cobalt and Chengxin Lithium are already developing processing plants that would mean they are exempt from the export ban.

Huayou Cobalt acquired the Arcadia hard-rock lithium mine outside Harare for US$422 million from Australian company Prospect Resources last year. The battery maker told the South China Morning Post in September that it was investing US$300 million to develop the mine with an aim to expand production for the electric-vehicle market.

When Huayou Cobalt bought Prospect’s stake in the mine, one of the conditions from the Zimbabwean government was that the firm would process the mineral locally to make lithium-ion batteries.

The company said it would process first-line lithium concentrates of spodumene and petalite in the first phase.

“We are not going to export raw ore,” Huayou Cobalt said. “Lithium is one of many inputs needed for the production of batteries – and we do not enjoy access to all others at the same time. In phase two of our work here, we are targeting production of lithium sulphates, and that is as far as we can see feasible under local conditions.”

Meanwhile, Chengxin Lithium spent US$77 million on a deal last year that includes mining rights in the largely unexplored Sabi Star lithium and tantalum mine project in eastern Zimbabwe. A groundbreaking ceremony was held there earlier this month for a US$130 million lithium processing plant. 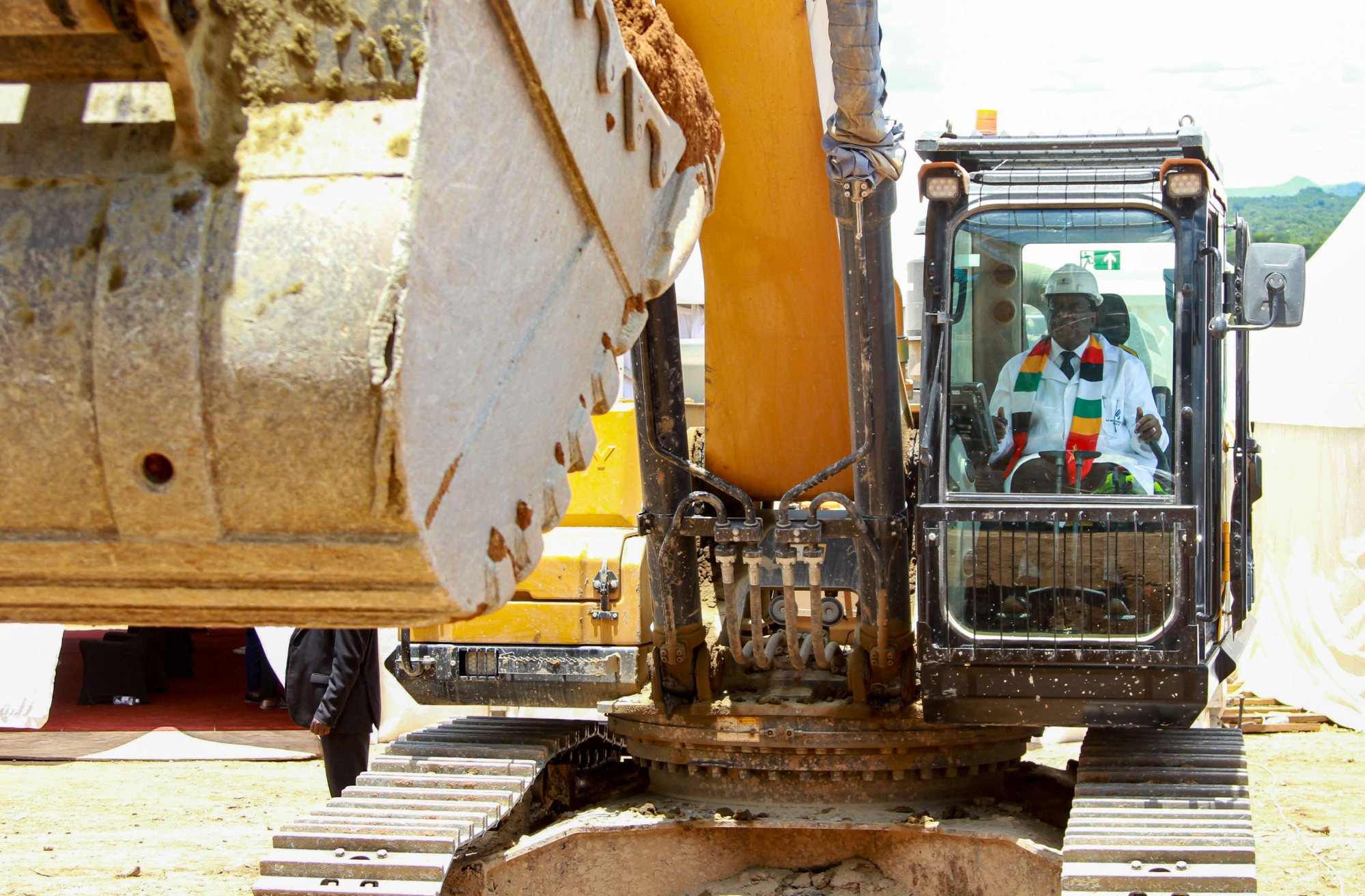 Zimbabwean President Emmerson Mnangagwa during a groundbreaking ceremony for a lithium plant at the Sabi Star mine in Buhera district, Manicaland province on December 14. Photo: Xinhua

Lauren Johnston, a China-Africa researcher at the South African Institute of International Affairs, said that “if African and Chinese interests diverge on minerals, and since Europe wants them [minerals] too, it might be most efficient to do the process at source and then share the fruits across those markets”.

She said this was especially the case if the manufacturing could be done from renewable energy sources in the first instance, like hydrogen.

But she said “if more African countries ban the export of key renewable minerals but are not ready yet to do the processing at home due to governance, infrastructure, energy and labour challenges, then this could impede the development of renewables globally”.

According to Gorden Moyo, director of the Public Policy and Research Institute of Zimbabwe, the export ban was long overdue.

“It makes perfect economic sense for Zimbabwe and all other countries to break the vicious circle of commodity export,” said Moyo, a former Zimbabwean minister for state enterprises.

“Raw materials fetch low prices in the global markets while at the same time exporting commodities is equivalent to exporting jobs.”

He noted that lithium was a key mineral in the clean energy transition. “If well managed, the massive lithium deposits in Zimbabwe may contribute towards public debt settlement, job creation and increased economic activity in the country,” Moyo said.

But he said the export ban would not stop smuggling.

“In reality the ban is meaningless simply because there is no political will to curb illicit mineral trade in Zimbabwe,” Moyo said, adding that it was being carried out by “military businessmen and women, senior government officials and politically exposed persons”.

“The law enforcement agencies have their hands tied by the very fact that the gamekeepers are actually the poachers themselves.”