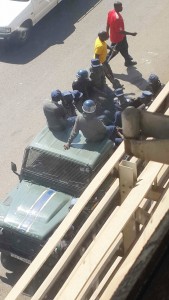 The siege follows the violent breaking up of several ZCTU demonstrations across the country last Saturday in which workers protested the recent Supreme Court judgement in the Don Nyamande and Kingstone Donga versus Zuva Petroleum case.

The ruling by Chief Justice, Godfrey Chidyausiku upholds a common law precedent allowing employers â€˜to terminate an employment contract by giving three months noticeâ€ with neither reason nor compensation for the loss of jobs. So far 18 000 workers have been dismissed countrywide within a month as the wave of redundancies continues.

“The idea is to intimidate ZCTU and to dissuade us from representing the workers,” said ZCTU Secretary General, Japhet Moyo.

ZCTU has since sued the Minister of Home Affairs for violently disrupting last Saturday’s demonstrations in which even journalists were assaulted.

Despite protests by workers, Government has remained defiant amidst the wave of dismissals. President Robert Mugabe has ignored pleas to invoke his Presidential Powers, while Minister of Public Service, Labour and Social Welfare, Prisca Mupfumira has only promised to amend the law. However, the promise may count for nothing if urgency and a time limit are not affixed to the issue.

â€œWe will amend the law, because the judiciary and the judges did not do anything wrong,â€ said the Minister.