Professional hunter Theo Bronkhorst arrived for trial on Wednesday in Hwange, accused of failing to "prevent an unlawful hunt". 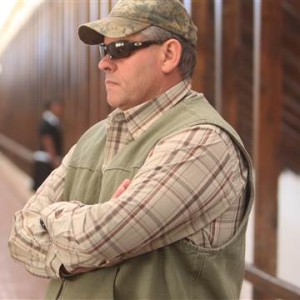 The professional hunter said the case against him was “frivolous and wrong”. He told reporters he believed he had the right permits, and did not breakÂ the law. He faces up to 15 years in jail if convicted.

“(Hunting) is an integral part of our country and it’s got to continue,”Â  said Bronkhorst. “And if we do not use wildlife sustainably, there will be no wildlife.” The His trial was postponed to Sept. 28. Another guideÂ was released without charges last week.

Bronkhorst acted as a guide forÂ dentist Walter Palmer in the July 1 killing of the lion named Cecil in theÂ Hwange National Park. Palmer has said he believed the hunt was legal.

Leaving the court, Bronkhorst said:Â “I feel sorry for my client. He is a good man. He did nothing wrong,” according to Agence France-Presse.

Outside the court house,Â Givemore Muvhiringi, Bronkhorstâ€™s lawyer, said: “My client is not guilty. The hunt was legal and that is the position we are going to defend when the trial opens,â€ the Associated Press reported.

Meanwhile airlines in the United States have banned the transportation of ‘ big-game ‘trophies’ after the uproar over Cecil, the lion killed recently by an American dentist.