The family of missing pro-democracy activist Itai Dzamara has petitioned President Robert Mugabe to undertake a thorough probe into the disappearance of the human rights campaigner. 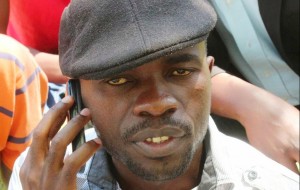 Dzamara went missing on 09 March, 2015 after he was abducted by some unidentified men from a barber shop in Harareâ€™s Glenview high density suburb. The petition addressed to Mugabe was delivered to his office by Dzamaraâ€™s wife Sheffra and his brother Patson.
In the petition, the family protested against the lethargic manner in which Zimbabwean authorities had handled the probe into the disappearance and appealed for help from Mugabe and the government in tracing his whereabouts.
They said the government appears to have adopted a relaxed approach towards investigating the disappearance and they were disturbed by the attitude taken by Mugabe who has â€œdone little or nothingâ€ to ensure the protection of citizenâ€™s fundamental rights and freedoms as enshrined in Section 90 (2) (c) of the Constitution.
The family holds state security agents accountable for the disappearance of their relative, saying he was a â€œmarked manâ€ since last year when he petitioned Mugabe to step down from power because he had run the once-vibrant economy into the ground.
They challenged the president to immediately issue a statement over Dzamaraâ€™s disappearance and order whoever is keeping him in captivity to release him instantly. The family also asked Mugabe to make a commitment and a public announcement that state security agents should intensify their efforts in probing the mystery surrounding the disappearance. In the event that Mugabe chooses not to entertain their requests, the family said they would stage non-violent demonstrations. – Zimbabwe Lawyers for Human Rights