ZANU PF factional fighting has exposed President Robert Mugabe as an â€œuncertain and timorous leaderâ€ who is unable to â€œdistinguish fact from fabricationâ€, a political think tank has said. 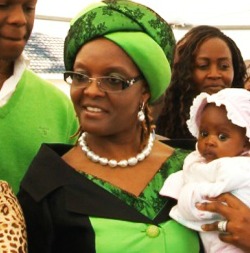 In a paper published last week, the Research and Advocacy Unit (Rau), also said the factional fights have exposed Grace Mugabe as almost â€œemptyâ€ and unfit for high office.

â€œThe saga unveiled Grace Mugabe as lacking both political nous and the gravitas seen as necessary for high office. It also exposed Mugabe as an uncertain and timorous leader â€“ uncertain as to whom he may trust; unable to distinguish fact from fabrication in the endless palace intrigues around him; fearful of forfeiting the adulation of his supporters and intensely sensitive to any criticism,â€ the paper said.

â€œHe (Mugabe) thus, as events showed, prefers to delegate the unpleasant tasks of leadership, and, where he is unable to fall back on his default position of not making any decision at all, eschews agency in the decisions which must be madeâ€.

Rau added that Mugabe, in both 2004 and 2014, had shown a propensity to play around with the party constitution to the benefit of one faction against the other.

In 2004, Mugabe illegally changed the Zanu PF constitution to insert a clause that demanded that one of the partyâ€™s vice presidents should be a woman. This effectively worked against Emmerson Mnangagwa then seen as best placed to take the position making way for Mujuru.

However in 2014 Mugabe again clandestinely changed the party governance charter this time in favour of Mnangagwa and removed the â€œMujuru clauseâ€.

He also allowed his wife to be used as a storm trooper in decimating the Mujuru faction through â€œpure lies and deceitâ€ including accusations of plotting an assassination.

In all this, Rau said, Mugabe has always appeared a bystander despite the fact that he seemed to have stoked fires, especially ahead of the 2014 fall-out.

â€œThose unable to thrive in a milieu where the only law is the survival of the fittest are trampled underfoot and looked upon with scorn, unless rescued by the power, munificence and compassion of Mugabe, to whom they are ever after to be grateful and beholden,â€ said Rau.

â€œThe opaque and secretive style of Mugabeâ€™s governance in the past makes it very difficult to determine whether he is playing his cards close to his chest, or in fact, not playing any cards at all.

â€œHis self-disassociation from events is flagged by marked illeism in his speech. Most usually, when referring to his determinations, particularly if they are sensitive, Mugabe opts for the first person plural, rather than singular, even where the decision is clearly his and his aloneâ€.

This, Rau added, is combined with a pretentious use of the subjunctive mood, even where unnecessary and grammatically incorrect.

â€œAnd, although Mugabe is frequently praised by party members (and occasionally even by opposition figures) as being a sagacious and masterful politician, the actions taken by him which inspire these accolades are not in the public domain.

There is a reluctance to admit Mugabeâ€™s hand in many of the notable events in Zimbabweâ€™s political trajectory,â€ said the report.

Rau also pointed to the Gukurahundi atrocities as another typical example of Mugabeâ€™s surprising show of ducking responsibility when it suits him.

â€œWhile Mugabe described the period (1983 â€“ 1987) as â€˜a moment of madnessâ€™, exactly who suffered from this temporary derangement is neither stated nor known,â€ the paper said.

Mugabe is also said to have blamed the farm invasions that clearly had the support of state institutions on peopleâ€™s restlessness and anger with governmentâ€™s willing-buyer-willing seller program.

â€œAccording to the Zanu PF narrative, the invasion of land which ensued immediately was due to the spontaneous anger of war veterans, their ire aroused by the rejection of a charter which would have allowed the expropriation of white farm land without compensationâ€.

Mugabe also refused to take responsibility for the displacements of almost a million people in 2005 under an operation code named Murambatsvina among other notable landmark events.

â€œIn March 2008, rumours were generated that it was not he who was responsible for subsequent events,â€ the paper noted.

â€œMugabe, it was claimed, had been prepared to step down, but was prevented from doing so by unknown securocrats, who then proceeded to bludgeon the opposition MDC formations into submission, and their candidate to victory, in the June 2008 run-offâ€.

Mugabeâ€™s habit of â€œremoving himself from the pictureâ€, makes it â€œextremely difficult to determine the extent to which Mugabe directs matters or is in control of his partyâ€.

â€œA perspective, held by friends and foes alike, that Mugabeâ€™s dexterity as a politician has kept him in power for 35 years, is not a view held here. It would also not be in keeping with the stated propensity of Mugabe to smile right up until the moment that he puts the boot in,â€ Rau said.