Customarily, this column deals with the most current socio-political subject. But this week I felt I should take readers behind the scenes. 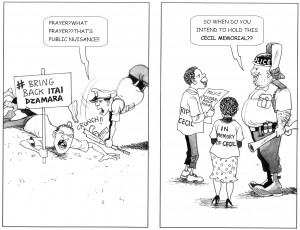 The creative process of this column requires regular perusal of the local daily newspapers. Throughout the week, I keep my ear on the local news bulletins â€“ an exercise which will drive even the most balanced person to drink, or to the brink of suicide. My motherâ€™s genetic contribution to my make-up is the malady of hypertension. Each time I listen to the news, or read the newspapers, I literally feel my breathing rate escalate and the pulse throbbing at my temples.
Growing up, I had teachers who, for the growth of vocabulary, encouraged reading â€“books, newspapers, etc. I also had parents who said â€˜if you donâ€™t listen to the news, one day you will wake up and find you have missed a life-changing event.â€™ For me, following the news is almost as natural as breathing.
I love writing. But the process of composing each weekly commentary really brings one up close to everything that is wrong with this once beautiful land of ours.

Uncaring leadership
We have a government that is unaware, uncaring and unable to deal with the ordinary personâ€™s struggle. Weekly, there is news of people losing their jobs. Optimists often speak of â€˜zvichanakaâ€™ â€“ the country will turn a corner soon â€“ but our 35-year history suggests â€˜soonâ€™ is being a little too positive.
As a writer, observing people comes naturally to me. Go past any area where people gather â€“ shopping centre or a busy road â€“ the despair is etched on faces and the slumped shoulders mirror the looks of dejection. The loss of hope, the despair is almost tangible. Daily, A-frame banners announcing newspaper headlines reflect the hopelessness: Prophet swindles parishioners, 100 Budiriro houses demolished, Jet fuel runs out at Air Zimbabwe, national grain reserves are low, pregnant women sleep on hospital floor, Harare Magistrates Court in ruins.
August is a month in which the country remembers fallen heroes of the liberation war. But this August will for a long time be remembered for the 20,000 workers jettisoned into the sea of unemployment, as captains of industry try desperately to sail against the gale force winds of low sales and high interest rates. Years from now, many who are only children today will remember August 2015 as the month in which their parents told them there was no butter to go with the bread. For others, the discovery was far worse; no bread at all, because mummy and daddy no longer had their jobs.
We now breeze over words like â€˜retrenchedâ€™ perhaps desensitised by over exposure to horrific news headlines. But retrenched, sacked, let go â€“ or any of the synonyms â€“ have unimaginable implications. Pause for a moment and envisage a man whose sudden dismissal arrives in the seventh month of his wifeâ€™s pregnancy. Their medical aid ceases to exist, the rent is due. Before reading on, pause and think of the impact on marriages and on self-esteem, when men no longer feel like men because they can neither provide nor protect. These are things that torment the mind of one who sifts through todayâ€™s news headlines.

2nd hand underwear
The majority eat only once a day. Three meals are a distant memory. Harare went for 12 hours without electricity on 15th of August. This is the hub of our industry â€“ what little industry we have left. Among the many goods peddled by desperate hawkers on our streets are pre-owned under garments. Anyone reading about that for the first time might wipe their eyes in disbelief and read a second time. Yes, there are used undies on sale on the streets and some people buy them. Itâ€™s either somebody elseâ€™s dirty linen or make do without support for vital body parts. That, ladies and gentlemen, is what we have become.
But, in a hermetically sealed bubble, life carries on for our leaders, who still find the money for endless travels abroad, for wailing motorcades, for ostentatious festivities â€“ election victory parties, birthday jamborees, any reason for the politically connected to kill the fattened calf and beat the celebratory drum. Recently I listened, in disgust, as the Chitungwiza town clerk, George Makunde, grumbled about the two company cars that he has not yet received.
â€˜I am driving a car that has a mileage of 297,000km. I was supposed to get two cars when I started my term of office but I only got one. This is unfair, people should learn to appreciate they are not paying rates but they expect service delivery,â€™ moaned Makunde. The town clerk thinks we should harpoon a medal to his chest, because he suffers the daily indignity of driving an old car.

Misplaced priorities
This past week, the President spoke in tones of counterfeit anger at the 120- year-old bones of Zimbabweans killed by European settlers and taken to the United Kingdom as mementos, or whatever. The President wants these bones back. I cannot help but wonder how these bones will impact the lives of millions who are jobless, hungry and only grateful that winter has passed without them freezing to death in a Zesa-less country.
I cannot stop wondering whether these stolen bones will be essential in sealing the chasms that make our potholed roads a death-trap. I ask myself if these skulls will, upon their arrival at Harare International Airport, metamorphose into extra hospital beds for the heavily pregnant women sleeping on the floor inside Harare Hospitalâ€™s maternity wards.
Perhaps reclaiming ancient skulls will refurbish the Rotten Row court building, where a judge, last week, heard a case in the car park, because the elevators are not working and people in wheelchairs have no access. Do the math; assuming five people per family, 100 houses bulldozed in Budiriro this month amount to 500 (or more) people left without shelter. Perhaps these 500 newly destitute people can all be crammed inside the skulls once they return to Zimbabwean soil.

Evangelical hysteria
Despite the sex scandals attached to â€˜prophetsâ€™ and the pastorsâ€™ fleets of luxury automobiles, despondent Zimbabweans continue to flock to new-fangled churches. On August 28 â€˜prophetâ€™ Makandiwa will draw 200,000 tongue-speaking miracle-seekers to the National Sports Stadium, whose terraces were built to seat only 60,000 bottoms. Our â€˜prophetsâ€™ grace the list of the top 50 richest Zimbabweans, not from oil deals, not from mining but from the Sunday collection plate. The multitudes, gripped by evangelical hysteria, cannot see through the scams that await them at prosperity churches. Can anybody blame them? As conditions worsen, more and more people seek a higher power for survival.
My blood pressure is rising. I end here. – Till next week, my pen is capped. JerÃ  Twitter @JeraZW