All the reports we get at the Vigil suggest that the wheels are coming off Zimbabwe. This week we were sent several emails which in different ways graphically show how bad things are becoming. 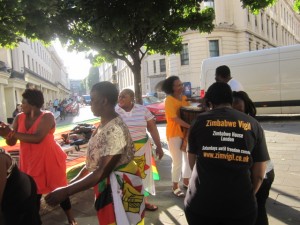 â€˜We live in a country with absolutely no rule of lawâ€™, said one correspondent. â€˜There is no money and everyone, not only government, is desperate to find funds. Corruption and bribery are a way of life. They are ingrained and will be hard to get rid of. We survive in hope!â€™

Our correspondent, a veterinarian, is worried that the desperate scramble for money poses a threat to wildlife. Commenting on reports that Chinese staff have replaced locals at Hwange Park, he said it was difficult to get correct information. â€˜We know that anti-poaching activities in Matusadona have been stopped and we know baby elephants have been moved to China. We think ivory and rhino horn are also going as well as body parts from lions and other animals which have value in China and other Asian countries.â€™ He added â€˜the huge reaction to the killing of the lion Cecil is a great way to cover up what is going onâ€™.

Another message to the Vigil came from a Christian charity working in Zimbabwe, which is supported by us. â€˜Zimbabwe is not the place for an easy life todayâ€™. It says. â€˜With the economy in tailspin, businesses closing and workers being laid off in increasing numbers, and with a quarter of the population forced to work outside the country in order to keep their families alive, it comes as no surprise to learn that the unemployment rate is a staggering 90 per cent. And if life is difficult even for the few in employment, one can but wonder how the rest manage to get by.â€™ (See: http://www.zimvigil.co.uk/vigil-news/campaign-news/712-zimbabwe-alert–relentlessly-pushing-zimbabwes-poor-towards-the-edge).

The third danger signal for us came in the latest article by economist and MDC T MP Eddie Cross, who has managed to be optimistic whatever the setbacks â€“ until now. He said real hunger and deprivation is now common in all rural districts. â€˜I estimate that up to 5000 people a day are now crossing our southern borders into South Africa â€“ more than 40 000 a week or 2 million people this year. Some will return but the majority will stay and seek new lives. Can South Africa take such an additional burden at this time? I think not.â€™ (See: http://www.thezimbabwean.co/2015/08/the-deepening-crisis-in-zimbabwe/).
As the axles gouge the roads, Dr Grace has opened a new factory selling her dairy products, including ice cream. MDC spokesman Obert Gutu spoke of her extravagant display of wealth in a sea of poverty and said it was a clear sign that the Zanu PF regime was completely out of touch with the people

Other Points
Â· We were visited by a Zimbabwean-born academic from Seattle University who asked for our help with his research on experiences when returning home to Zimbabwe and thoughts on reconciliation.
Â· Zimbabwean performers, including Vigil supporters, are taking part in the Journeys Festival in Leicester next weekend. See â€˜Events and Noticesâ€™ for details.
Â· Thanks to those who arrived early to help set up: Eunice Mucherechedzo, Esther Nyambi, Humphrey Dube, Nqobizitha Moyo, Mary Muteyerwa, Bridget Mupotsa and Fungayi Mabhunu. Thanks to Eunice and Esther for looking after the front table.

FOR THE RECORD: 35 signed the register.