The first 24 of 200 wild elephant calves from Zimbabwe that have been ordered to be shipped to China are in the quarantine cells of Chimelong Zoo in Guangzhou, says the latest bulletin put out by a group of concerned citizens set up to lobby against the capture of Zimbabweâ€™s wild animals for sale to zoos. 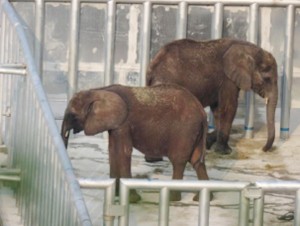 Dr. Poole has called for accountability over the circular wounds that can be seen on their skin. The elephants clearly appear gaunt.

A number of photographs of the baby elephants have been taken on behalf of Animals Asia Foundation by a local NGO there, Nature University. According to Elephant Expert, Dr. Joyce Poole, these elephants â€œlook really horribleâ€, as is to be expected after their traumatic capture, seven-month captivity and days of road and air travel. The animals clearly appear gaunt and Dr. Poole has called for accountability over the circular wounds that can be seen on their skin.
The Concerned Citizens group reports that the public show of solidarity and response to its fund-raising efforts has been overwhelming. They also report that the homes listed below belong to Li Song and her cohort Francesca:
â€¢ 56 The Chase Mt. Pleasant, Harare
â€¢ 82 Piers Road Harare, telephone 0772428424. 91 Piers Road Harare.
â€œAn eye witness stated that there are highly secure large storage facilities and â€˜carving machines; on at least one of these properties. Of course, what to do with such information remains an interesting question. It is plain to all that the authorities are not blind to the activity at these premises, and will sadly not find this info a â€˜revelationâ€™ to be acted upon,â€ says the bulletin.

CITES certificates
The group also reports that it tried to check on CITES Certificates No: ZW/0416/2014 listing four Elephants, and No: ZW/0436/2015 listing eight elephants and two crocodiles that had been sent to it.Â  The â€˜Exporterâ€™ listed on both certificates is TERRESTRIAL SAFARIS, 5th Floor Livingstone House, Samora Machel Avenue, Harare.
Jane High, the Secretary of the Chimanimani Tourist Association, visited the companyâ€™s offices last week to try and establish whether the CEO of Terrestrial Safaris was aware of the damage being done to the tourism industry by the sale of wildlife to zoos in China. Instead of meeting the CEO as hoped, she spent 30 minutes being interviewed by three men who refused to give their ID details, behaved aggressively throughout, threatened her and then accused her of being the one making false CITES certificates.
â€œSo, we can now confidently confirm the existence of the exporter of our National Heritage as Terrestrial Safaris on 5th Floor Livingstone House. Please feel free to verify this for yourselves, preferably in groups, and ensure others know exactly where you are! You will not be greeted with the generous hospitality Zimbabweans are famous for,â€ says the bulletin.
â€œBoth Importers on the certificates are Chinese:
â€¢ Taiyan Zoo (8 elephants and 2 crocs) and
â€¢ Kinjian Safari Park (4 elephants) which online seems to translate to Chimelong Xiangjiang Safari Park, where our 24 babes are currently in quarantine.â€
The group has now sought an audience with the Director General of National Parks and Wildlife Management Authority, to confirm or deny the veracity of the CITES certificates. They have also visited the following officials to communicate their concerns
â€¢ Brigadier General W.E. Kanhanga, Deputy Minister of Tourism & Hospitality Industry
â€¢ Dr. Samuel Undenge, Minister of Energy and Power Development and MP for Chimanimani
â€¢ Prince Mupazviriho, Permanent Secretary, Ministry of Environment, Water and Climate.
â€¢ I.D Kunene Director Ministry of Environment, Water and Climate

Political orders
â€œDuring these meetings two issues were repeatedly stressed:
1.) The long term cost, in every respect, to National Parks of these sales.
2.) That the only real way forward is transparency and accountability. A practical plan to implement full and credible animal welfare involvement of all future wild captures was clearly outlined,â€ says the bulletin.Â  â€œSeveral Parks Officers we met are as distraught as we are. Our Parks Authority needs our loyalty and our support â€¦ as we have found that they are acting under orders from the political elite.
â€œThe trade in wildlife which has taken root in Zimbabwe can be compared with the Drug Trade in Mexico. Huge financial gains and losses are possible and hence a dangerous protection racket is involved.
The death of Gregory Gibbard must not be forgotten. Neither should we ignore that people of calibre who dedicated themselves to the welfare of our wild animals – now driven out of Zimbabwe – Sharon Pincott, Meryl Harrison and Rory Young to name three that you may have heard of. Once those speaking out have been effectively â€˜exportedâ€™ Zimbabweâ€™s wildlife is now open season.â€- If you wish to make an anonymous or public comment please do so: [email protected]