One of the leaders of the Gamatox faction has complained that Zanu PF has been turned into Mugabeâ€™s private property and says the party is inflicting â€˜untold miseryâ€™ on Zimbabweans. 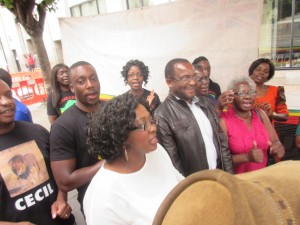 Former Masvingo Minister of State Kudakwashe Bhasikiti was speaking in an interview with the Daily News.

Bhasikiti says he was one of three people who could speak officially for the proposed People First partyexpected to be launched next month. The others are the former Presidential Affairs Minister Didymus Mutasa and Rugare Gumbo, ousted Zanu PF spokesman. Bhasikiti asserted that People First would be led by Joice Mujuru who he insisted would never rejoin Zanu PF. â€˜Gamatox will never be Zanu PF again. The post-congress Zanu PF translated itself into a private company which is now owned and privatised by a single family. We cannot be part of someoneâ€™s companyâ€™, he declared (see: Mujuru turns down Mugabe, Zanu PF â€“ http://www.zimbabwesituation.com/news/zimsit_w_mujuru-turns-down-mugabe-zanu-pf-dailynews-live/).

Bhasikiti is the latest expelled Zanu PF bigwig to spill the beans about the partyâ€™s corruption, violence and vote rigging. Last week Mutasa said in an interview with the Daily News that People First must apologise not only to the peoplethey had misruled but also to the entire world.

The Vigil thinks this will be a good start but doubts that their deathbed repentance will convince the 50 or so opposition parties. â€˜As a matter of principle we are not going to join hands with the likes of Joice Mujuru andDidymus Mutasa because their hands are dripping with bloodâ€™, said Elton Mangoma of the latest MDC partyette, the Renewal Democrats of Zimbabwe (see: http://www.zimbabwesituation.com/news/zimsit_w_mangoma-blames-govt-for-dzamara-abduction-the-zimbabwean/ – Mangoma blames govt for Dzamara abduction).

As Mugabeâ€™s bankrupt private company, facing liquidation, veers crazily between plans to tax vendors or drive them out of business, retain ghost workers and sack real ones, invite foreign investors and rob them blind, details have emerged of how Zanu PF has looted the National Security Authority, which isresponsible for paying pensions. A revealing article in the South African Mail and Guardian describes how it has been used by Mugabe and Co as a cash cow (http://mg.co.za/article/2015-08-06-greed-corruption-lead-to-povertyamong-zims-pensioners – Greed, corruption ‘fuel poverty among Zim’s pensioners’).

Â FOR THE RECORD: 35 signed the register.