President Robert Mugabe has cautioned his wife, Grace, against making inflammatory remarks in public about the top leadership in Zanu (PF), fearing that might cause further divisions. 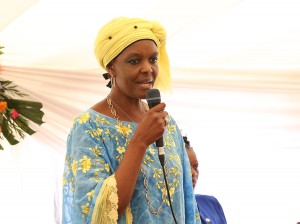 Grace Mugabe â€“ exposed her husband as a weak leader who had lost control over his wife.

Sources who attended last weekâ€™s Womenâ€™s League national assembly meeting in Harare told The ZimbabweanÂ  that Grace confided in close colleaguesÂ  that her husband was rattled by her recent rant and controversial statements regarding his deputy presidents.
â€œGrace shared with some of us that her husband was worried that her statements in public might anger the VPs (Emmerson Mnangagwa and Phelekezela Mphoko) and cause further disgruntlement among them.
â€œShe said Mugabe was concerned that the two VPs might start plotting against her and isolate the First Family in the long run. That would further undermine the one centre of power that was established at congress (in December last year),â€ said a senior member of the womenâ€™s wing.
Congress resolved then that there must be only one centre of power around Mugabe after unsubstantiated allegations that his former deputy, Joice Mujuru, was rallying a faction to topple the 91-year-old leader.

People First
Mujuru and her allies have all been expelled from the party and are linked to a movement called People First that might turn into a political party ahead of the next general elections in 2018.
The sources reported that Grace acknowledged that she had heeded the caution by her husband and would desist from making disparaging attacks against the partyâ€™s top leadership, even though she remained adamant that they were dividing the party.
â€œTypical of her, Grace did not mince her words, saying she still believed that the VPs and other senior members of the party were unsettled by her growing influence and the limelight she was hogging,â€ said the league member.
At the end of July, Grace publicly alleged that senior party members had devised a plot to smear her image fearing that she was angling to succeed her husband ahead of them.Â  In a wide-ranging interview with the state media during her 50th birthday celebrations, Grace fell short of naming presidential aspirants as the ones behind the plot.

Presidential ambitions
â€œWe hear a lot of things being said about us, allegations being made I have presidential ambitions. When these people who actually think that they are the ones who must take over after Mugabe imagine that Mugabeâ€™s wife has those ambitions, they actually start mudslinging,â€ said Grace.
Mnangagwa has for a long time been scheming to take over from Mugabe, while Mphoko is rumoured to have also developed presidential ambitions.Â  Despite being a newcomer to the echelons of power, the latter seems to be enjoying the backing of a younger generation of party hawks that are against Mnangagwaâ€™s ascendancy to power.
Another womenâ€™s league member who was present at the assembly meeting said Mugabe was riled by Graceâ€™s recent remark that Mnangagwa and Mphoko took notes from her.
“I am seeing that the calibre of the vice presidents is now different. They are different in that just in the few months they have been in power I have lost count of the times that I have sat down with them one-on-one to talk about the development of Zimbabwe,â€ Grace said at a party gathering in early July.

Weak leader
The second source said the statement riled Mugabe, while the two VPs had confided their anger to colleagues. â€œWe hear that the president felt that the statement exposed him as a weak leader who had lost control over his wife. He hates playing second fiddle to anyone.
â€œMai Mugabe must not dabble in national issues since she is only a party member. Her revelation showed that she was virtually involved in government matters when she was not supposed to,â€ she said.
The informants said Mugabe had registered his displeasure with her and advised her to tone down her statements as they were causing him embarrassment and generating tension within the top leadership. As a result, they said, she had decided to climb down and attempted to paint a rosy picture about her relations with the party leadership.
Grace recently attempted to blame unnamed party members for trying to cause a rift between her and the two deputies and denied any tiff with them. Speaking at the national assembly gathering, she said: â€œAll those who say that must stop it. You wonâ€™t succeed. You wonâ€™t succeed in dividing me and the vice presidents. Whatâ€™s happening is that people leave the president (Mugabe) out, trying to pit me against the vice presidents.â€
Mugabe had also urged Grace, who is seen as increasingly manipulating her ageing husband, to respect party structures and avoid interfering with them, said the sources. Media reports indicate that the president recently ignored her advice to have the late senior military officer, Stephen Hurungudo, declared a national hero – insisting that the army should have made the recommendation.