President Robert Mugabe has been suffering increasing isolation from African leaders who are agreed that his one year appointment as chair of the continental bloc was an embarrassment. 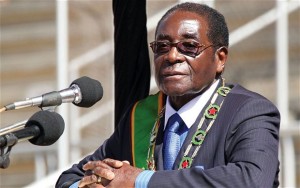 An intelligence source said Zimbabwe was given the chance to head the African Union (AU) as a way of placating Mugabe with the hope continent-wide support would convince him to retire and make way for newer blood.
â€œThe AU discovered that it had made a mistake because the president has given no sign that he will hand over the baton soon. That is not the only reason why African leaders became increasingly uncomfortable with his (Mugabeâ€™s) chairmanship. They were also embarrassed by his fall at the airport earlier this year,â€ said the source.
In addition, many African leaders were peeved by Mugabeâ€™s arrogance and considered his ideas and methods old fashioned and too combative against the west.
The recent snub by the US president, Barack Obama, when he visited the AU headquarters in Addis Ababa, demonstrated the isolation that Mugabe is suffering among his peers, most of whom are now much younger than he is. â€œIf African leaders were united, they would not have allowed Obama to visit the AU HQ without the courtesy of including or seeking the permission of the chair.
â€œWhile the American president used the technicality that he was paying a visit to the AU secretariat, the truth is that he was avoiding Mugabe with the blessings of African leaders. That is why there has been so much silence about it,â€ said the source.
Mugabeâ€™s spokesperson, George Charamba, recently denied that the Obama visit was a snub on Mugabe. â€œObama has come for an official visit and to address the staff there. There are many dignitaries who come to the AU headquarters and you can imagine if all come wanting the president’s input,” he said.
Even though there are no public spats, Mugabe is said to be at loggerheads with the heads of Nigeria, South Africa, several north African countries and smaller nations like Botswana in southern Africa.
The source said he suspected that the Nigerian government deliberately breached protocol and let journalists from that country embarrass Mugabe during a visit earlier this year. Television journalist Adeola Fayehun ambushed him at the airport and asked: “Will there ever be change in Zimbabwe like we have in Nigeria?â€
Mugabe has in the past described Nigerians as crooks, a gaffe that successive leaders in that country have reportedly not forgiven him for. New media reports say he admitted to his supporters that the French were using some African leaders to isolate him.
The reports, which quote unnamed sources, say he acknowledged that Ivory Coast president, Alassane Ouattara, barred his stopover in that country at the behest of the French government.
Our source could not confirm this incident, but said Ivory Coast was one of the countries hostile to Mugabe.