Former Bantu Rovers midfielder Marvellous Nakamba has made his break at Vitesse in the Netherlands topflight league, where he has started the teamâ€™s first three matches of the season and impressed in a central midfield role. 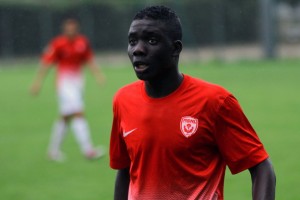 Nakambaâ€™s upturn in fortunes could prove a huge bonus for the Warriors, who resume their quest to qualify for 2017 Afcon finals with a date against Guinea in Harare next month.
Nakamba seemingly had a difficult first season in the Dutch Eridivisie, making just eight substitute appearances last season, but things took a positive turn at the start of the current campaign, when the 21-year-old started both legs of the Europa League qualifiers against Southampton.
Although Vitesse were outclassed 5-0 on aggregate, Nakamba completed both legs and apparently did well to impress Coach Peter Bosz. He was in the starting line-up for the teamâ€™s opening league match of the season, a 1-1 draw away to Willem 11, which he completed.
He then lasted 81 minutes in the 3-0 home win the following week and was again in the thick of the action the following encounter, as he completed the full 90 minutes in Vitesse 2-0 loss away at giants Feyenoord on Sunday.
Vitesse currently lie ninth on the 18-team-log table with four points from their first three matches. Nakamba made his senior debut for Zimbabwe in the 2-1 win over Malawi in the 2017 Afcon qualifiers in May.
Apart from Nakamba, Knowledge Musona has also been doing well for KV Oostende in Belgium, where he has netted four goals in the first five matches to top the scoring charts, while Cuthbert Malajila, with a brace, and Khama Billiat, were in fine form as Mamelodi Sundowns clobbered Bidvest Wits 4-2 in a home league encounter on Saturday.