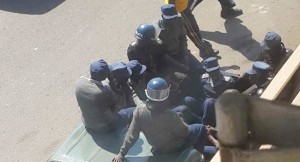 Donâ€™t stand under that tree! Thatâ€™s the unspoken warning at this time of year when the Cardinal woodpeckers are back in abundance: excavating holes in trees, chipping out bark and leaving you wondering
if things are really as safe, strong and stable as they seem. Every year at about this time, as the sun gets warmer and the leaves pour off the deciduous trees, the woodpeckers become easily visible and clearly audible as they undertake their spring, head-banging excavations. You almost get a headache watching them as they hammer on the branches but itâ€™s nothing compared to the national headache caused by events of the past month.

Weâ€™ve just gone through the same old, predictable, window dressing that comes with the two day Heroes and Defence Forces holidays in Zimbabwe. After years of neglect, the usual round of lick-and-a-promise patching up by town councils hardly concealed anything. It started just two days before the national event which brings VIPâ€™s out of their comfortable mansions and into the real Zimbabwe for an hour or two. In my home town the local council didnâ€™t come and collect dustbins which havenâ€™t been cleared for five months; they didnâ€™t come and fix streetlights which havenâ€™t
worked for eleven years; they didnâ€™t come and cut the shoulder high grass on the verges, backfill the gullies on the roadsides, clear the storm drains, or collect the piles of garbage dumped on residential roadsides. Their only visible attempt to make our town ready for Heroes Day was a couple of women wearing Zanu PF clothes picking up litter on the main road into town and a six man crew filling potholes
on two roads in the town: one that leads past the Zanu PF headquarters and one that leads to Heroes Acre cemetery.

While the speechmaking was going on most ordinary people were wondering what theyâ€™d find when they got to work the next day; would they still have a job or were they about to join the estimated twenty thousand people or more whoâ€™ve been laid off in the last month. The massive lay-offs followed a Supreme Court ruling last month which enabled employers to sack workers on three monthsâ€™ notice without having to follow procedures specified in the Industrial Relations Act.
These procedures included gratuities, awards and fees so high that most employers havenâ€™t been able to reduce their workforce for years while the economy has been shrinking because they literally couldnâ€™t afford to pay them off. There have been countless instances of companies being forced to sell assets and buildings and close down in order to pay retrenched workers their â€˜packages.â€™

But now, as is so often the case in Zimbabwe, there is no middle ground in anything, no moderation or humanity, and we swing wildly from one extreme to the other. For years its companies whoâ€™ve been on the receiving end of the punitive demands of massive packages, but now itâ€™s the employees who are the victims . Everywhere you turn you hear stories of people whoâ€™ve spent ten, twenty or thirty years in the same job suddenly finding themselves laid off with three monthsâ€™ pay. A whole new language is appearing as this mess unfolds; instead of packages, gratuities and allowances now we hear of downsizing, rightsizing, normalizing and rationalizing. None of the new words offer relief to thousands of newly unemployed people; what will they do, how will they pay rent, school fees or support their families now?

There are three facts that put this huge new crisis in perspective this spring 2015. The first is that Zimbabweâ€™s unemployment rate is already at around 90%. The second is that an estimated three million Zimbabweans have been forced to go and work in the Diaspora in order to keep their families alive. And the third is a staggering statistic quoted in the press this week. Economist John Robertson estimates that only 700,000 people are in formal employment in Zimbabwe and half of those are employed in the civil service. These are all very chilling things to comprehend in a country of between 12 and 14 million people.

Until next time, thanks for reading, love cathy.