Maputo, 25 Aug (AIM) â€“ Mozambican President Filipe Nyusi has kept his word, given at a religious service on Sunday, and has invited Afonso Dhlakama, leader of the former rebel movement Renamo, for a face-to-face meeting in Maputo 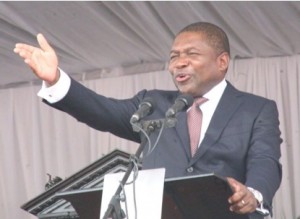 Nyusi had addressed a service held by the Brazilian Pentecostal sect, the Universal Church of the Kingdom of God (IURD), at which he promised to send a letter of invitation to Dhlakama on Monday.

â€œOur differences and our ideas are less important than the interests of the peopleâ€, he said. â€œThe people want peace and tranquility. This I will do. The people is not on one side. It is on all sides. The people also include those who follow the President of Renamoâ€.

According to a report in Tuesdayâ€™s issue of the independent newssheet â€œMediafaxâ€, Nyusiâ€™s letter reached Dhlakamaâ€™s Maputo office on Monday afternoon. It did not suggest an exact date or place, but said the meeting should be in Maputo in order â€œto discuss matters of peace and developmentâ€.

Nyusi and Dhlakama met twice in February, in a Maputo hotel, since Dhlakama refused to come to the Presidential offices.

Antonio Gaspar, Nyusiâ€™s advisor on political and media matters, said that, since the matter is urgent, the President would like to meet with Dhlakama as soon as possible.

The Renamo national spokesperson, Antonio Muchanga, confirmed that the letter had arrived, and a reply would be sent to Nyusi on Tuesday. He could not say whether the reply would accept or decline Nyusiâ€™s invitation, but he was sure that Dhlakamaâ€™s reply would demand a specific agenda for the meeting.

â€œWhat are we going to talk about?â€, asked Muchanga. The Renamo leader â€œis not going to a meeting just to take tea, or just for show. The meeting must have a clear and well-defined agendaâ€.

Dhlakama does not seem to be in any mood to talk. At a rally on Saturday, in the central city of Quelimane, he announced that Renamo was suspending its long-running dialogue with the government.

The dialogue, which began in April 2013, was held at Renamoâ€™s request, with an agenda provided by Renamo. After 114 rounds of talks, there is almost nothing to show for the dialogue. In particular, Renamo has refused to disarm. Despite the agreement signed on 5 September last year on a cessation of military hostilities, the Renamo militia has not been disbanded.