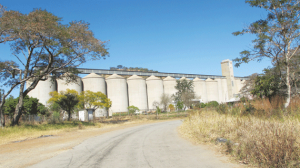 The police have been called in to guard Grain Marketing Board (GMB) depots, mostly in rural areas, in the wake of the retrenchment of hundreds of the parastatalâ€™s employees. Sources confirmed to The Zimbabwean that uniformed non-regular and regular members of the Zimbabwe Republic Police (ZRP) had been put in charge of depot security.
â€œThere is still grain and commodities such as rice, salt and mealie-meal stocked at the depots for sale that need to be guarded â€“ but recent retrenchments have removed almost all staff from the depots,â€ said a former employee at the GMBâ€™s Shurugwi depot.
The grain utility fired more than 400 workers recently, joining other parastatals and private companies which have dismissed an estimated 20,000 people since the Supreme Court ruled on July 17 that employers could lay off workers merely by giving three monthsâ€™ notice.
The grain utility is reportedly set to offload a total 1,500 workers in a move that would leave it with only a skeleton staff. All the employees were dismissed without payment of salaries owed for more than a year.

As good as dead
The Tongogara depot is now left with only one employee identified as Chimombe, who could not be reached on his mobile phone. He was one of the few employees who were left at the depot after its manager, one Marowa, and numerous others were fired or resigned in frustration over the non-payment of salaries.
â€œChimombe is now the shop attendant, manager and groundsman all rolled into one. The depot is now a ghost of its former self, but it has been deteriorating over a long time,â€ said the former employee, who is among those who left voluntarily and is owed thousands of dollars by the GMB. The parastatal has over 80 depots dotted around the country, but insiders said most of them were in disarray. In the Midlands, depots in Shurugwi, Kwekwe and Gweru have reportedly been severely affected by the shedding of staff.
â€œGMB is just as good as dead now. Yes, it has been in the intensive care unit for a long time, but this is the time to mourn the parastatal. Soon, we would have forgotten there was ever such an establishment,â€ said a councillor at the Shurugwi Town Council.

Debt to farmers
Most other rural GMB depots in such provinces as Mashonaland West, East and Central as well as Matabeleland have also met the same fate as the one at Tongogara in Shurugwi North.
The problems at the depots have also affected farmers, who are still owed money by GMB after having surrendered their cereals to the grain utility over the years.
â€œWe donâ€™t know where to go to claim our money. The intimidating police officers and the neighbourhood watch members are not entertaining any questions from us,â€ said Simon Muzura from Karoi in Mashonaland West province.
â€œThe gates are locked most of the time and only those that wish to buy GMB commodities are allowed inside but, in some cases, they are served through the gate,â€ he added.
The police details and their assistants are not supplying the farmers with anyÂ  information regarding who to approach and even the skeleton staff at some of the depots are reported to be hostile.

Painful
â€œIt seems we will never be able to get our money. What is more painful is that we have debts that we hoped to settle with that money. The depot manager had promised us that that we would receive our money soon but he is gone,â€ said Muzura.
GMB headquarters phones in Harare were left ringing without anyone responding on several attempts. The utility has been struggling to pay its employees and farmers and even offered them cereals as payment.
Silos at most of the depots are crumbling and need urgent repair for them to be able to store grain. This was revealed in a recent report by the auditor general, Mildred Chiri, who said at least $50 million was needed for basic repairs.
Most of the silos are already unfit to store maize for human consumption as large volumes of water have penetrated the structures over the past six years.Â  GMB has resorted to hiring out some of its silos as it attempts to reduce its debt to the farmers, which stands at around $49 million.