As Mugabe fears secrets in closets 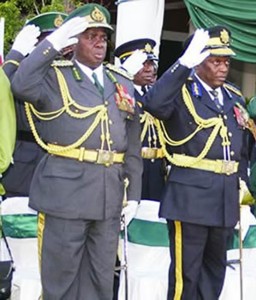 President Robert Mugabe has reversed an earlier decision to retire at least three generals fearing that this would threaten his hold on power. Instead, their contracts have been renewed for a further year.
The three securocrats who were supposed to have been given the boot by now are police commissioner Augustine Chihuri, prison service chief Paradzai Zimondi and Central Intelligence Organisation director general Happyton Bonyongwe.
They were linked to the ousted Zanu (PF) faction led by Joice Mujuru and had been locked in a fierce turf war to succeed Mugabe.
Mujuru and her allies were sacked prior to, during and after the Zanu (PF) congress last December for allegedly plotting to topple the 91-year old ruler.
Intelligence and Zanu (PF) sources said orders to force the three generals out were reversed after Mugabe consulted an inner clique of advisors who suggested they should stay until the dust had settled in the party.

Die another day
â€œThe generals live to die another day. Scenarios have been drawn and it was felt that it would be un-strategic to get rid of them, especially Chihuri and Bonyongwe. Their departure has several implications.
â€œOf most concern is that they know too many secrets and booting them out might compromise the presidentâ€™s position. While the three generals have their own skeletons in the cupboard, they could do anything out of frustration,â€ said a senior intelligence source.
Mugabe, he added, was convinced by his advisors that even though they might not participate directly in politics after retiring, they had enough information to leak in one way or another and expose numerous heavyweights, including the president.
â€œArmed with their secrets, the generals have the capacity to further destabilise Zanu (PF) and even bolster People First. That would leave HE (His Excellency) with just too much on his plate,â€ he said.
The People First movement comprises former Zanu (PF) members who were fired alongside Mujuru.

Lame ducks
A plan hatched by the anti-Mujuru strategists was to retire Chihuri in late December, with his place being taken by Trust Mugova, a senior army officer based at the KGVI military headquarters. Zimondi and Bonyongwe would also be replaced by generals, with one of them reportedly coming from the presidential guard.
â€œLetters of termination of employment of the three generals had already been drafted but President Mugabe decided to sit on them as he watched the situation. Even though he doesnâ€™t trust them anymore, he decided to let them stay. They know what is happening and are conscious of the fact they can go anytime. They are therefore lame ducks who are not making major decisions and most of the sensitive work is being carried out by trusted juniors,â€ said another intelligence source.
The generals have been noticeable for their unusual silence, amidst reports that some of those that had already been earmarked for higher positions after their bossesâ€™ departure were already victimising those aligned to the service chiefs.
Chihuri and Zimondi, both war veterans, are the longest serving police and prison services chiefs since independence in 1980, with critics saying Mugabe held onto them for their work in upholding his rule. They were due for retirement long back, but their contracts have been renewed on a yearly basis, with Chihuriâ€™s being extended a record 15 times.
A faction led by Emmerson Mnangagwa and aided by Grace, Mugabeâ€™s wife, worked intensively to have Mujuru ousted at congress and gave Mugabe the impression that factionalism had been removed through the creation of what came to be known as the one centre of power enjoyed by Mugabe.
However, the ageing leader and his wife have admitted that the centre is no longer holding since more camps have emerged in the post-congress period.

Grab the baton
At one time, Mugabe publicly admonished party members who were rallying behind his deputiesâ€”Mnangagwa and Phelekezela Mphokoâ€”separately as internal groups position themselves to grab the baton from Mugabe.
Besides Mnangagwa, a group of Young Turks is said to be interested in taking over the reins of power in 2018, among them Jonathan Moyo and Saviour Kasukuwere. Recent reports also indicate that Grace has renewed her plans to take over from her husband, who is showing signs of tiring.
In addition to the uncertainty in his party, Mugabe is grappling with a worsening economy that has pushed more than 80 percent of the working population out of employment.
There is increasing frustration among the electorate that Zanu (PF) promised more than two million jobs in its 2013 election manifesto and has failed to deliver.
The intelligence sources cited the example of a senior CIO female operative related to Bonyongwe who had been fired while the anti-Mujuru agents within the spook outfit were boasting to their rivals that their days were numbered.
The security sector has for a long time been divided between the Mujuru and Mnangagwa factions.