Defending champion Munyaradzi Runganga is confident of snatching another victory at the forthcoming Mr Strongman contest, slated for Harare Sports Club at the weekend. 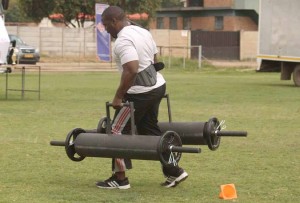 Modelled along the lines of Americaâ€™s Strongest Man, the Zimbabwean contest will see locals compete in various activities that include pulling and carrying heavy weights.
An athlete who moves the heaviest load in the shortest time over the complete distance wins the event.
Runganga was crowned champion last year, after he beat a field of eight other athletes that had entered the extreme contest. He walked away with $500, a trophy and a hamper.
â€œI am going for nothing less than another win in the coming competition,â€ said Runganga recently.
â€œI have taught myself that as long I am fit enough to compete, I should grab everything that comes along my way. I learnt a lot when and after I won the competition last year. I will use the experience gained to defend my title. Last year, the event was more of a provincial show because all the contestants came from Harare, but I am told it has gone national. I am still confident that I will win though.â€
He revealed that he had also intensified his training to cope with the new applicants and new status of the competition.
â€œMy training has been rigorous and I am confident that the other contests will not be able to match me. I am really working hard at training to make sure I defend my title without fail.â€
Event director, Henry Bindu, has promised a tougher and better organised event this year.
â€œLast year was the first time we held the event, which had nine contestants, but we have now received inquiries from Mutare, Bulawayo and Gweru, meaning we will have a more national outlook,â€ Bindu told The Zimbabwean recently.
â€œItâ€™s not about the size of the athletes, but skill and mental strength. In each event we will be adding weights, while others are eliminated,â€ he said.
Tasks at last yearâ€™s event included pulling a Mazda3, vehicle but Bindu revealed they would bring a cargo truck this time, adding that they had received inquiries from some women seeking to be included in the competition.
â€œWe had not planned to get the ladies competing, but we could end up holding an exhibition for them. Registration is now open at Excel Gym at Harare Sports Club and we are happy that a few corporate sponsors have agreed to be part of our sport, as we continue to grow,â€ said Bindu.