Fighting corruption is not forthright or simple, but it is not impossible, writes TAKUDZWANASHE MUNDENGA. 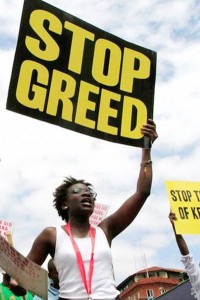 The blame for underdevelopment of Africa is often cast upon the former coloniser, while paying no attention to all the internally created structural flaws of the continent. Yes Europe and North America have not been sweet angels in our positioning in economic geo-politics, but why is it that our governments are still treating corruption with kid gloves?
The word â€œpoliticianâ€ has degenerated into an effigy in Africa. In most cases it is used to describe a particular individual with a reputation for plundering common resources. Yet nothing happens to them because they are above the law.Â  In reality, that person is not a politician but a self-serving politico.
Political corruption encompasses bribery, smuggling, fraud, illegal payments, money laundering, window dressing, false declaration, evasion, underpayment, deceit, concealment, aiding and abetting of any kind to the detriment of the general populaceÂ  by those in the corridors of political power. It includes both monetary and non-monetary benefits.

Moral fabric
Corruption by politicians and the politically-connected undermines peopleâ€™s trust in political systems, institutions and leadership. Corruption is the antithesis to democracy and constitutionalism. It side-tracks resources that are needed to improve the lives of citizens in order to enrich a few, at great cost to many.
It inhibits the state from achieving its statutory obligations, corrodes the legitimacy of a democratic government and undermines the rule of law – thereby bedevilling the moral fabric of the society, and choking economic growth. It has a powerful deleterious effect on foreign direct investment (FDI) by destroying investor optimism and confidence.
Internal problems should be resolved internally. It is not Americaâ€™s problem, neither is it Australiaâ€™s, but our respective governments in Africa have to take action to guard our continentâ€™s reputation and political profile. The phenomenon of corruption is costing the Sub-Saharan region a great deal and hampering its economic development.
In a bid to improve its dignity and ensure an environment conducive to rapid economic and political change, the region must be willing to look inward at confronting the glitches that have been besetting the continent for a long time. Corruption involves decisions; it does not just take place. Plunder and corruption entail that people or a person both decide to participate in corrupt practices and have the opportunity to do so.

High risk, low gain
Approaches to address corruption for that reason have to address the component of choice as well as that of opportunity. They have to make corruption a high-risk and low-gain, as opposed to a low-risk and high-gain endeavour. Such strategies have to be country-specific. What applies to one country may not necessarily apply to another.
Practically in all African countries where corruption is rampant and embedded there is need to re-establish governmental legitimacy and re-build institutions as well as hitting hard at corrupt practices. Fighting corruption is not forthright or simple, but it is not impossible.
The variegated surface complexion of the region, which shows one country with widespread corruption while the next is least corrupt, attests how it can be combated at national level before trying to address it as a regional issue. Our eyes were not spared to witness the Cashgate Scandal in Malawi, Salarygate Scandal in Zimbabwe and Nkandlagate Scandal in South Africa yet Botswana remained totally unaffected by the dramatic wave.

Use ICTs
The use of contemporary Information Communication Technologies (ICTs) in government can also foster the anti-corruption struggle against â€˜self-serving asset strippingâ€™ by public officials and ICTs may play a central role in averting some styles of grand political corruption. E-Governance denotes an essential prospect to move forward with qualitative, cost-effective government services since automation is robust and promotes liaison between citizens and government.
Since developing countries are characterised as countries with low internet connectivity, there is generally absence of political will to embrace the initiative. The potential benefits of using ICT in government go beyond efficiency and effectiveness to touch on accountability and transparency.
For example, the introduction of the PROMUN financial administration and management software for local authorities and water utilities in Zimbabwe and Zambia has sealed some of the financial leakages that were previously rampant. This reduces some corrupt behaviour by externally enhancing relationships with citizens internally by effectively controlling and monitoring employees’ behaviours.
By making available interactive access to and use of information by people who use government services, e-governance initiatives hope to empower citizens and improve relationships between governments and citizens by helping build new spaces for citizens to participate in their overall development.
An effective approach to deal with corruption in Africa is for each state to make, and effectively enforce, constitutional provisions for accountability of public officials and guarantee participatory democracy, which encourages popular participation of civil society to ensure accountability and transparency of governance.

Accountable judiciary
Additionally, the restoration of a de-politicised, professional and accountable judiciary and the law enforcement sector accommodate checks and balances within the government thereby preventing the abuse of power by politicians and those on influential positions. An unambiguous separation of powers within the government should impartially subjugate the arbitrary ambitions of any of the three arms of government.
For instance, the executive and legislature should pursue their mandate while not tempering with the verdict of the courts or undermining judicial independence in order to promote legitimacy, good governance and respect for human rights. The rule of law and reverence for constitutionalism should be observed regardless of someone’s position in government.
The rapport between government and the media should not be branded by rigidity and suppression as it is in some African countries. This relationship in countries such as South Africa and Zimbabwe is constantly disintegrating with the promulgation of the Protection of State Information Bill or else known as the â€˜Secrecy Billâ€™ and other supplementary policies which have resulted in the oppression of the media andÂ  lack of press freedom in South Africa.
Likewise Zimbabweâ€™s Access to Information and Protection of Privacy Act (AIPPA) continuously prevents the media from investigating sacrosanct information pertaining to corruption, especially by public officials.
The recommendation to developing countries especially those in Africa are to turn off the blame culture and start focusing on those structurally made bottlenecks that are often contributing to the failure of policy packages. It is not that the policies that are formulated in Africa are bad, but their execution if often countered by massive rot.