Hundreds of people have faced the savage retribution in the dirty war against democracy. The disappearance of Itai Dzamara is one more in a tragic litany, writes EDDIE CROSS. 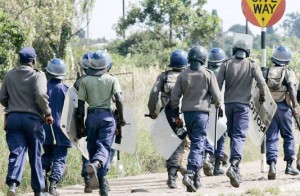 Just after we in the MDC had inflicted the first electoral defeat on Zanu (PF) in the Referendum in 2000, we went straight into the elections for Parliament. We were a motley collection of activists, Trade Union organizers, farmers and ordinary people.
I remember well, two young people who were typical of the people flocking to our banner in an effort to unseat what had become a totalitarian regime. They included a pretty young girl, Talent Mabika and her close friend Tichaona Chiminya.
On the 14th of April that year they were out in the rural areas in a pickup truck campaigning for our candidates in the Buhera North District. Out of the blue they were approached by a man whom we later identified as a member of the Central Intelligence Organisation (CIO). Joseph Mwale was well prepared and poured petrol over the vehicle and set it alight. They did not die immediately and managed to get out of the vehicle, but both died of their burns.
In the subsequent elections we lost by a mere three seats and in the process triggered a savage campaign against us that has continued to this day. We tracked Mwale, he was promoted, moved around the country and eventually we got the case into the Courts which found that he had a case to answer and ruled that he should be brought to trial â€“ that was 15 years and four months ago and he still has not faced justice.
He must not ever think that we have forgotten what he did or who he is and one day we will see justice, even if it takes us much more time.

Savage Retribution
Since then hundreds of people have faced the same savage retribution that Talent and Tich faced in 2000. We always have people in Prison on one pretext or another, the Police and the Courts are used as a political weapon against the forces of democracy in Zimbabwe. But it is the secret war that the regime has fought against us that has been most difficult to deal with or to manage.
There are three main agencies â€“ the CIO is the best known but they also have a Police Intelligence Organisation they aptly call Pise â€“ the same word as is used to describe a hyena. Then there is a military intelligence organisation. All are used as instruments for what we might call â€œthe dirty war against the democratsâ€.
It takes many forms â€“ these shadowy organisations have access to sophisticated equipment for collecting intelligence, they can intercept and monitor phone calls both by land line and cell phones, they can eavesdrop on conversations in public places and even behind closed doors. A visitor to our Head Office once remarked to us how intense the electronic activity was around the building. We once even discovered that the CIO has rented an office in our own building and at one stage had the capacity to listen to conversations in the Presidentâ€™s office via a laser beam aimed at his windows. Right now the Ministry of Defence is rumoured to own the building next door to our offices in Harare.

We can shoot you
They have the capacity to follow us on the streets and quite often I get warned that a team is monitoring my movements. When I made a controversial statement to the House of Assembly on the diamond mining activity at Marange, I was immediately followed on my way home to Bulawayo and after a high speed chase of 150 kilometers they intercepted me and threatened me saying â€œWe are from Charlie 10 (CIO) and you are being monitored. We can shoot you from the side of the road at any time and nothing will happen to usâ€.
Sometime later, the Chairman of the Mines Committee in Parliament made a similar statement to the House and 10 days later he was found dead in a â€œcar accidentâ€ at 21.00hrs on a remote rural road â€“ a real professional hit. It was reported as a â€œaccidentâ€ and no autopsy was allowed.
I also had an incident when I was driving past a Military barracks outside Bulawayo and what seemed to me was a shot smashed my windscreen. Had it been six inches higher it would have hit me in the face or throat.
I received a mysterious e mail from an unknown source after the threat against me and in the message were the names, force numbers and ID numbers as well as the bases at which the four young people in the vehicle came from.
I lodged a complaint with the Police and gave them the registration number of the vehicle (it was registered to the Ministry of Home Affairs) and the names and other details of the group. Nothing transpired.

Popular uprising
So it did not come as a surprise to me when Itai Dzamara was abducted on March 9 this year in Harare by four men in a white, unmarked twin cab vehicle. Itai had become well known for his one man campaign to call for change in Zimbabwe and in my view he was viewed by the regime as dangerous in that what he was doing could inspire a popular uprising against the State.
The regime is leaking like a sieve and from my personal perspective, based on all I have heard, Itaiâ€™s abduction was carried out by Military intelligence agents on the instruction of the Joint Operations Command, a shadowy parallel government that has been the key to maintaining the Mugabe regimeâ€™s grip on power in Zimbabwe. I believe he was taken (like Roy Bennett when he was abducted from Charles Prince Airport) to the former Rhodesian interrogation centre at Goromonzi.
Roy was fortunate â€“ his abductors were followed by a convoy of vehicles which then waited outside the Goromonzi complex until they produced him in a vehicle and took him to Mutare where they held him until he was brought to Court. Itai was not so fortunate and in my view he was killed within a very short period time. To support this, a body was seen on the side of the road in the area shortly afterwards but subsequently disappeared.

Suppress opposition
Disappearances are a typical means used by dictatorial regimes throughout the world to try to suppress opposition. They are particularly cruel means of doing so, leaving family and friends anxious and without closure on the matter. I am delighted that at every diplomatic function held here, the senior Diplomats present have made their position clear, the State must produce Itai or face the consequences. This sort of pressure is essential if a rogue regime like ours is to be restrained in such activity. If there are no consequences then this sort of thing will become routine.
I hope the international community is doing more than just raising the issue at every opportunity â€“ for example I hope that Itaiâ€™s family is being provided with assistance now that their breadwinner is no longer with them. I hope the kids are able to have their school fees paid and the Mrs, Dzamara is able to make some sort of a living. Our Womenâ€™s Assembly was going to help her set up a small business to help and I am sure that a bit of capital would help.