â€˜There are lies, damned lies and statisticsâ€™ goes the saying. Mugabe ticked all these boxes in his State of the Nation Address to Parliament. From his preliminary lie boasting of â€˜peace and stabilityâ€™, to his damned lie about tackling corruption to his ludicrous growth statistics, he was the total liar. 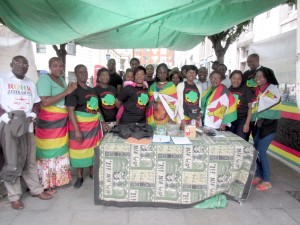 We at the Vigil were cheered that the Address was mocked by opposition MPs, who jeered at his fantasy plan to turn around the collapsing economy â€“ a plan which Morgan Tsvangirai said was â€˜out of touch with realityâ€™. He urged Mugabe to step down and call early elections, promising he would not enter another unity government.

Zimbabwean economist John Robertson said the State of the Nation Address was clueless and â€˜failed to provide solutions to the challenges affecting the economyâ€™. He added â€˜â€™there is no admission that it is the governmentâ€™s bad policies that have got us to where we are. They talk about revitalising agriculture but they do not talk about restoring the rule of law on land, security of tenure, property rights and fundingâ€™ (see: http://www.theindependent.co.zw/2015/08/28/govts-10-point-plan-a-worthless-dud/).

The Vigil plans to point this out to any prospective investors who may be prepared to pay Â£110 to attend a Zanu PF Forum in London next month on investment opportunities. The meeting will be attended by three ministers â€“ Mike Bimha, Minister of Industry and Commerce, S K Moyo, Minister of Economic Planning and Investment Promotion and Dr Obert Mpofu, Minister of Transport and Infrastructure Development.

We will brief those who attend the Forum about the colourful history of the three ministers and the other Zimbabwean officials there. We certainly have much to tell them about our old friend Mr Mâ€™puffed up. Investors will be keen to know, for instance, what bribes they will be expected to pay him. And we are sure they will want to hear from Edmund Makona, CEO of thriving Air Zimbabwe. They might like to ask why he has reinstated the airlineâ€™s jailed boss, Grace Pfumbidzayi (see: http://nehandaradio.com/2015/08/23/air-zimbabwe-forced-to-reinstate-jailed-boss/).

Supporters may wish to email us their own comments on the three ministers and Mr Makona. Any information they may have about the other delegates would also be welcome (for names see: http://www.eventbrite.co.uk/e/zimbabwe-trade-and-investment-forum-london-uk-tickets-18233317343).
Other points
Â· British investors may also want to know when the Home Affairs minister Ignatius Chombo and his deputy Ziyambi Ziyambi will face justice over the bi-election violence in Hurungwe West in June. The government-funded Zimbabwe Human Rights Commission has recommended that they be prosecuted and noted there was â€˜disregard of the law when it comes to people who are deemed not allegiant to the ruling partyâ€™ (see: http://www.zimbabwesituation.com/news/zimsit-m-chombo-ziyambi-named-in-poll-violence-dailynews-live/). The investors might also be interested to note that, more than a year after Mugabe ordered bankrupt parastatals to stop paying obscene rewards to their executives, they are still getting way above the salary cap set by the government (see: http://www.zimbabwesituation.com/news/zimsit_w_parastatal-bosses-defy-mugabe-on-salaries-the-zimbabwe-independent/).
Â· The open space outside the Zimbabwe Embassy where we hold our vigils is becoming increasingly busy. Crowds, mostly of migrants, congregate for free food handed out by an Islamic charity right after the Vigil. We are encouraging the unpaid Zimbabwe Embassy staff to join the queue.
Â· We were pleased to be joined by members of MDC-T Executive in the UK: Tonderai Samanyanga (Chair), Owen Muganda (Secretary) and Sibongile Sihwa (Vice Chair).
Â· Thanks to those who came early to help set up: Patricia Masamba, Esther Nyambi, Joseph Chivayo, Pearl Shambare, Ashley Mhako, Nobukhosi Moyo, Similenkosi Matiwaza, Muchineripi Chigwedere, Ali Ansar, Ephraim Tapa and Fungayi Mabhunu. Thanks to Patricia and Esther for looking after the front table.
For latest Vigil pictures check: http://www.flickr.com/photos/zimbabwevigil/. Please note: Vigil photos can only be downloaded from our Flickr website.

FOR THE RECORD: 51 signed the register.