Between mid-2009 and early 2014, Crynos Jamu, 38, sold an average of four imported used cars from Japan every fortnight, pocketing more than $6,000 in profit every month. 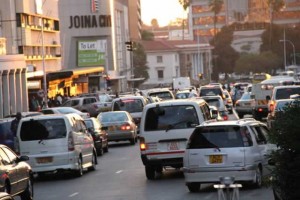 The slump in the used car business might come as a blessing in disguise for town planners as they battle to ease traffic congestion.

Trading mostly in sedans from premises just outside the city centre, he was assured of customers and managed to buy a medium density stand where he built a decent house for his family. Using part of his income, he started an informal money lending business, renting a small office in Harareâ€™s central business district.
But Jamu is now a pale shadow of the man who used to turn heads in his neighbourhood, splashing money on parties and living large. He has stopped selling cars and is now focusing on his money lending business, which is also suffering because of intense competition from other loan sharks and a low clientele.

Too many dealers
â€œThis used car business is going down,â€ Jamu told The Zimbabwean as he anxiously waited for clients in his office in the Kopje area. â€œPeople are no longer buying cars as much as they used to when the economy was stable. And there are also too many people dealing in that field now.â€
He acknowledged facing problems paying school fees for his two sons who are in boarding school.
â€œIronically, I now have to borrow money from other loan sharks and am deep in debt. There was a time when I thought that things would always be smooth for me,â€ he added.
Jamu, like many other enterprising people in the capital, started his car importation venture just after the government dollarised the economy and got rid of the local currency, which had been rendered useless by hyperinflation that peaked in 2008.
That was also the year when Zimbabweâ€™s three main political parties, Zanu (PF), MDC-T and MDC-N, came together to form a Government of National Unity (GNU) that helped stabilise the economy and boosted investor confidence.

End of GNU
Things turned for the worse once again, however, after the 2013 general elections that Zanu (PF) won with a controversial â€˜landslideâ€™ that also put an end to the GNU. â€œThe end of the GNU coincided with a renewed downslide of the economy that has affected both formal and informal businesses,â€ said Innocent Makwiramiti, an economist.
â€œThe used car business has not been spared by the current economic crisis and that is why you see the car importers crying now, but there are various other factors driving the slump,â€ he added.
Jamu, a former boilermaker, said far fewer people were buying cars now as opposed to the GNU era. â€œEveryone is crying and the majority of the people can no longer afford to buy cars now. How can they, when employers are busy retrenching them? In fact, those that have fallen on hard times are trading off their cars, but prefer doing that on their own,â€ he said.

Everyone is crying
Another used car importer operating at the once bustling premises close to the National Railways of Zimbabwe (NRZ) station along Seke Road rued an increase in import duty for used cars, saying it had severely affected his business.
â€œIt is now too expensive to import used cars, which were affordable to many before that. We have had to pass the costs to the clients who have been dwindling since the increased duty was effected,â€ said Luckmore Vangani.
The hike in import duty that was announced by the Zimbabwe Revenue Authority (ZIMRA) that is desperate to raise money for treasury came three months ago, adding to the woes of the already troubled car importers.
The increases mean that importers have to pay more than 100 percent of the vehiclesâ€™ value at the border, in addition to other costs such as Value Added Tax (VAT). â€œMany people who had never dreamt of owning a car got the chance to do so from us, while others imported on their own. The imported cars were affordable to many but that luxury is going away now,â€ added Vangani.
Informal car dealers are now resorting to hiring touts who approach prospective clients and hustle to have them look at their cars with the promise of a bargain.

Road congestion
The influx in used cars into Zimbabwe, as in the case of other African economies characterised by low-income among its citizens, was causing headaches to town planners due to increasing congestion on the roads.
â€œThe slump in the used car business might come as a blessing in disguise for town planners as they battle to ease traffic congestion.Â  On the other hand, government will lose out because it was raking in millions of dollars from the duty every month,â€ said Makwiramiti.
Those that can still afford to are capitalising on the slump in business that has caused a fall in prices, with sedans that used to cost $5,000 now going for as low as $3,000.
Respected economist John Robertson said flooding of the local market with used cars had affected the viability of locally assembled vehicle businesses while denting volumes of imported new cars.
â€œCheap imports are never good for locally manufactured goods and we have seen this in the textiles industry. So, a slump in used car imports might bring hope to local assembley plants,â€ he said. â€œHowever, that would mean only those with money will be able to buy the cars while the majority goes back to public transport.â€

Welcome news
In late March, government ordered all ministries and public entities to buy at least 80 percent of their fleets locally as a way to protect the industry. That was in line with a cabinet circular of 2011, which had been ignored as public sector departments continued to buy from abroad.
Willowvale Mazda Motor Industries (WMMI) hailed the move and indicated that it had the capacity to produce sufficient units even though it was suffering low volumes.
â€œIt (the directive) is welcome news as we have been waiting for it to get the sector going. There is little activity going on because we donâ€™t have supportive measures in place,â€ said WMMI managing director, Dawson Mareya.
The Motor Industry Association of Zimbabwe says that in 2013 alone, the country exported a paltry 760 cars against 52,000 imported units, including used and new cars, while experts estimate that about 80 percent of cars on the roads are from outside.
Meanwhile, sales of Chinese vehicles have increased. Sales of Great Wall Motors Limited (GWM) vehicles more than doubled in the first six months of 2014, according to new statistics. GWM is ahead of models like Nissan, Toyota, Mercedes and Jaguar and its sales have been rising since 2010. A total of 1, 866 vehicles were sold, down from 2,122 units registered last year.