A frustrated Phelekezela Mphoko twice approached President Robert Mugabe offering to resign from his post as co-vice president due to a tense relationship with his counterpart, Emmerson Mnangagwa. 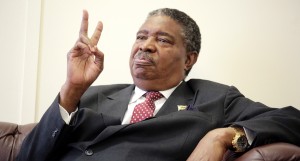 Both were made vice presidents at last yearâ€™s Zanu (PF) congress where the former deputy, Joice Mujuru, was kicked out for reportedly working to topple Mugabe. Trusted sources told The Zimbabwean this week that animosity between the two had reached boiling point and Mugabe was working tirelessly to douse the fire.

Hostile attitude
â€œVP Mphoko is of the view that ED (Mnanagagwa) is an extremely difficult person to work with. He is an extremely frustrated man and has met with HE (His Excellency) twice in the last five months complaining about Mnangagwa.
â€œIn the long discussions with Mugabe, he offered to resign from his posts at both party and government levels and be considered for another position if Mnangagwa continued with his hostile attitude,â€ said one of the sources on condition of anonymity.
Mnangagwa is reportedly peeved by the fact that Mphoko is being treated with the same respect as he is, while he considers himself far senior. Mphoko, a former ambassador, was a surprise inclusion in the presidium that Mugabe established at congress.
Prior to that, he was not a prominent politician in the ruling party and had not held any senior position.
â€œMugabe is strongly opposed to his (Mphokoâ€™s) resignation as that will paint the picture of a party in disarray and cause further turmoil.
He has discussed the matter with the two and they have promised to work to normalise their working relationship but, on the ground, there is no improvement,â€ said the source who works for the Central Intelligence Organisation (CIO).

Cut-throat politics
â€œIt seems VP Mphoko still has a lot to learn about the cut-throat Zanu (PF) politics. HE doesnâ€™t like people who act like cowards because his thinking is that they can easily abandon him in time of need. Besides, you donâ€™t resign in Zanu (PF). You wait for the president to get rid of you, otherwise he will see you as a potential enemy. There is a possibility that Mugabe is now also angry with Mphoko,â€ added the source.
Recent media reports quoted un-named sources saying Mugabe had implored the two deputies to work together during a politburo meeting. Mphoko is in charge of national healing and is left as acting president when Mugabe is away.
The sources said Mnangagwa was using his strong links in the CIO, of which he was minister in the past, to spy on Mphoko as a way of discrediting him. â€œMphoko is not comfortable with the people he is working with and feels that he is surrounded by spooks. He is convinced that ED is plotting against him.
He sometimes makes use of people outside the CIO to protect him, even though this is un-procedural and risky,â€ said another source.
Mnangagwa is said to have been angered by Mphokoâ€™s statement in Masvingo recently when he said he was equal to his former boss. When Mphoko was made acting president recently, Mnangagwa tried to throw spanners into the works by usurping his powers and conducting himself as though he was in charge, said the sources.

Bad blood
The bad blood between the two deputies has pushed Mphoko into the arms of the faction of Young Turks who are also not happy with Mnangagwa. These are reported to include Jonathan Moyo, the former information minister whose transfer to higher education is said to have been caused by Mnangagwa, and Saviour Kauskuwere, the national commissar. The Young Turks known as Generation 40 (G40) are angling to influence succession dynamics in Zanu (PF) while Mnangagwa seems to have been convinced he is the natural heir to Mugabe after succeeding in ousting Mujuru.
â€œMphoko does not exactly like G40 but he is aligning himself with it as both a way of spiting Mnangagwa and as a survival tactic,â€ said the second source.