In the darkest of all possible timelines, at least from the perspective of Minnesota dentist Dr. Walter Palmer, he will find himself behind bars in a Zimbabwean prison. 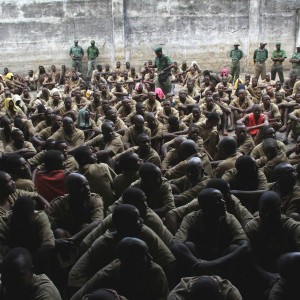 It seems an unlikely conclusion to the Cecil the Lion saga, but itâ€™s not outside the realm of possibility. Officials have asked for his extradition and the U.S. has a treaty withÂ Zimbabwe that may allow that to actually happen.

What if Palmer does end up in a Zimbabwean prison? What will his life be like? We collected some details about life behind bars in the country ruled by withering dictator Robert Mugabe.

Theyâ€™re notoriously overcrowded.
Zimbabweâ€™s prisons are so full that Mugabe tried to alleviate the problem by pardoning 2,000 inmates last year. Itâ€™s a move heâ€™s tried before and the numbers keep creeping back up. To blame, in part, is the tendency to jail pre-trial detainees for obscene periods of time. A study last year said nearly a third of those in the countryâ€™s prisons hadnâ€™t even faced trail.

One anecdote from inside Zimbabweâ€™s prisons comes from a Kiwi journalist arrested in 2012. He shared a single cell with 38 other men and single toilet with 250. And he spent his time â€œcrushing lice between fingernails and picking weevils out of the disgusting food provided for nourishment,â€ according to a New Zealand paper.

Not that there’s much food anyway.
In the first 11 months of 2013, more than 100 people died from malnutrition in Zimbabwe’s prisons, according to the U.S. embassy in Harare. As one prison official told AFP, â€œFood is not all that adequate, we do not have enough food.â€ And prisoners arenâ€™t just dying because theyâ€™re hungry, theyâ€™re dying because theyâ€™re angry about being hungry. Earlier this year, four prisoners were killed during food-related protests. According to News24, inmates in one prison eat a â€œbreakfast of maize porridge without salt or sugar, followed by the staple maize meal served with boiled kale or cabbage or beans for lunch and supper.â€ At another, thereâ€™s no food at all. Prisoners have to rely on family members to bring them meals.

Everythingâ€™s disgusting.
This dispatch from a prison in the middle of Zimbabweâ€™s mountains is from 2009, but itâ€™s still informative. The short piece tells of life in Mutare, a desolate prison where the water barely works and everythingâ€™s dirty.

Sometimes there is an ancient threadbare red blanke [sic] but they are so covered in lice and excrement, that detainees try never to have to use them, even in cold winter months.

Most of the lavatories â€“ holes in the ground in the corner of the cell â€“ are only flushed from the outside when a passing warder feels so inclined. â€¦

They are woken through the night by rats and bites from an appalling range of lice, bed bugs and spiders.

When supplies do arrive, they rarely make it to prisoners.
Many prisons in Zimbabwe rely on donations to keep prisoners supplied with soap and lotions, among other things. Problem is, those donations are often pilfered by underpaid prison staff members before they make it to prisoners, leaving inmates filthy and starving in their squalid cells.

After reading all of that, you surely want to see moving images now, right? Hereâ€™s some video that was secretly recorded in 2009: