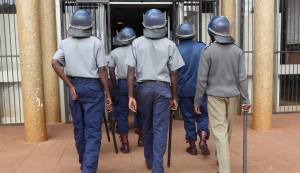 According to police sources, the fracas ensued after Matutu had been frustrated by the slow pace at which the police officers were handling a report he made against employees from his Jo Berry gold mine. He wanted the cops to arrest his employees, who he accused of stealing gold ore in protest over non-payment of wages.
â€œEveryone at the police station was shocked when Matutu started beating up some cops in the charge office. He accused them of deliberately failing to deal with his case as a matter of urgency by telling him they would attend to it the following day,â€ said a source. Another source said Matutu appeared to be drunk.
He was arrested and detained for the night and released later the following day. Charges of assault have been laid. Acting police provincial spokesperson Ethel Mukwende said he would look into the matter before issuing a statement.
Zvishavane-Ngezi Zanu (PF) legislator, John Holder, confirmed the incident. â€œI have been engaged by senior police officers from Zvishavane, who are saying we should use party processes to discipline Matutu. It is obviously worrying when a person who leads our youths behaves in that manner and disrespects law enforcement agents. We will handle the matter internally,â€ he said.
Early this year, Matutu and a police officer, Paridzirai Dube, were taken to the High Court by a Zvishavane businessman, Tendai Mpofu, who accused the pair of swindling him of more than $12 000 in a failed mining deal.