LONDON â€“ A Zimbabwean man, Tende Chirinda has been exposed by the British Sunday Mirror newspaper for his role in trying to sell a s.e.x-t.a.p.e and intimate pictures of his friend Tom Jimson with former Miss Great Britain, Danielle Lloyd. 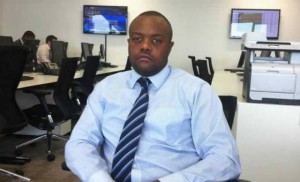 Under new UK laws, people who post so-called â€œrevenge p.o.r.nâ€ pictures and videos on the Internet could face two years in jail.

Jimson, a Dubai-based property salesman, tried to sell the graphic videos and pictures for Â£150 000 while sneering: â€œItâ€™s not about the money â€“ I just donâ€™t like her.â€ He brought in Chirinda as a fixer to broker the deal for the X-rated video.

Financier Tende Chirinda â€“ Jimsonâ€™s middleman â€“ set up a meeting with Sunday Mirror newspaper investigators at an upmarket hotel in the strict United Arab Emirate city of Dubai on Friday. Five days before he had emailed the paper touting the videos and pictures, saying Danielle could be seen â€œas clear as dayâ€.

According to the report Chirinda initially demanded a Â£200,000 fee for the material, before dropping his price by Â£50,000.
Meanwhile Jimson claimed he was doing the model a favour by releasing the tape. He alleged she was broke and smirked: â€œI donâ€™t think sheâ€™s been brought up very well. She wonâ€™t expect me to do what Iâ€™m doing.