as hopes of coalition fade 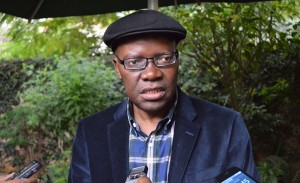 Renewal Team leader Tendai Biti: Tsvangirai slept at the wheel during the GNU and his party is founded on violence.

Tendai Biti has laid into his former boss, MDC president Morgan Tsvangirai, describing him as a thief who should be ashamed of demanding terminal perks from the Zanu (PF) government.

The Renewal Team leaderâ€™s latest statements are seen as denting hopes of the opposition forming a successful coalition that would challenge Zanu (PF) at the 2018 elections.
Bitiâ€™stTeam, which split from MDC-T in early 2014, is expected to transform into a political party â€“ the Peopleâ€™s Democratic Party (PDP).

In an exclusive interview this week, Biti acknowledged the need for the opposition to form a political convergence, but virtually ruled out working with Tsvangirai.

â€œNo single party can dislodge Zanu (PF) and Mugabe, hence the need to establish a strong frontline of the opposition. We are prepared to work with principled and like-minded political movements, but there are some who are difficult to engage. Some of the leaders have no conscience or morality as they are busy womanising and demanding stipends from Zanu (PF), the devil.

They are living in houses provided by Zanu (PF),â€ said Biti.
He said he had no personal feelings against Tsvangirai, saying â€œI donâ€™t hate him. I pity him.â€ But he poured scorn on the MDC-T leader over his reported demands for terminal benefits for the time he worked as prime minister under the GNU.

â€œSome leaders believe in the politics of prosperity and looting of state resources, but we must change this. Where in the world does it say a prime minister must get terminal benefits for serving in that position?â€ added Biti. â€œWe donâ€™t share the same values with MDC-T.

Morgan Tsvangirai was a thief. He slept at the wheel during the GNU and his party is founded on violence. That is why we decided to part ways last year.â€ Following the split, there were sharp disagreements over party property, with both sides resorting to grabbing assets and accusing each other of stealing money from the coffers.

He is also seeking reunification with Ncubeâ€™s MDC after a false start and an agreement that the Renewal Team must first transform into a political party.

Biti said his party would usher in a new political dispensation that discouraged leaders who stayed in power for too long.
â€œThere has to be a new narrative that goes beyond egocentric personalities, big cliques and politicians who are beyond their sell-by dates,â€ said Biti.

He said turbulence in Zanu (PF) provided his party and the broader opposition with a chance to establish robust politics, saying they would tap into the older generation in former Zanu (PF) members to blend it with the younger generation of politicians.

â€œWe have come to realise the MDC, going back to 1999 when we launched the party, did not have a heritage. The party was composed mainly of younger generation cadres who had no direct link with the past. Our party understands the need for generational balance that includes pan-Africanism, the value of the war of liberation and democracy.

â€œThe splits in Zanu (PF) therefore present us with the opportunity to complete a generational equation that brings the past and present together in order to forge a successful future. There is no manual for democratisation and we must not be blamed for past mistakes,â€ said Biti.

Electoral reforms
He reiterated the Renewal Teamâ€™s position that his party would not participate in the 2018 elections if there are no meaningful electoral reforms, adding that Zimbabwe must be governed by a National Transitional Authority (NTA) in preparation for 2018.

The NTA would be an inclusive organ bringing together leaders from all sectors of society and be guided by the tenets of constitutionality, adherence to democratic electoral principles and the social contract that recognises the importance of citizen participation and partnerships.

â€œWithout the NTA, Zanu (PF) can consolidate its hold on power.
He admitted that his formation was experiencing severe financial problem.
â€œWe are scratching the barrel. The 2013 elections brought this about as donors have pulled out and left us on our own,â€ he said.