Youthful Zimbabwean striker Thomas Chidewu has made the cut at Ajax Cape Town, following his registration with the Absa Premiership for the current season. 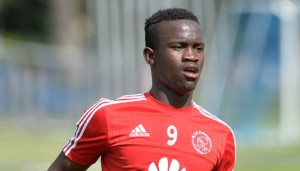 The Urban Warriorsâ€™ coach, Roger de Sa, said recently the teenager would mostly be used as a developmental player for the Multi Choice Diski challenge, but his registration with the PSL shows he could well be in the running for the first team as well.

According to the latest squad list released by the PSL last week, Chidewu is registered as only the third foreigner in the 30-man list Ajax Cape Town side, with the other two be fellow Zimbabwean, Milton Ncube and Finnish Anssi Jakkola.

Although he had said the former Highlanders striker would play in the developmental side, De Sa had already shown so much faith in him, saying he would â€“ when time comes, make a big difference for The Urban Warriors, who are currently top of the Absa Premiership following their 2-1 win over visiting Polokwane City last weekend. They are also in the final of the MTN8 Trophy, in which they meet defending champions, Kaizer Chiefs, at the Nelson Mandela Bay Stadium in Port Elizabeth this weekend.

Chideu joined the Mother City side about a month ago, following a fortnightâ€™s trial stint during the off-season, in which he impressed their technical team.

â€œHe is still very young, so it will not be difficult for him to learn from us as he adjusts to the Absa Premiership,â€ said De Sa back then.
â€œWe did well last season and will be one of the teams in everyoneâ€™s mouth this season, so it will b a bit difficult for us to maintain that kind of showing, but with the kind of signings we have made, we are ready to compete again.â€

Chideu joined Highlanders in January after spending the previous 12 months in England, where he was involved in a schools exchange programme. He did so well there that he attracted interest from English Premier League sides like Leicester City and Sunderland, and actually trained with the Leicester Under-21 side.