GWERU-4 September 2015-NAOMI GATSHENI of Chiundura, Vungu district has borne the brunt of hunger and poverty for many years as the semi-arid land has produced poor yields. 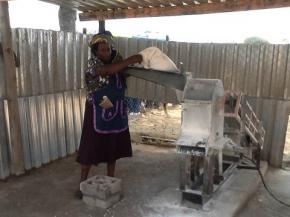 Naomi Gatsheni next to her grinding mill

Gatsheni, a widow has for years failed to provide a decent meal for
her children due to perennial drought that have hit the area , but the
programme mooted by Women and Land in Zimbabwe has brought hope to her family.
Women and Land in Zimbabwe, a Non-Governmental Organisation (NGO) provided seed and irrigation schemes to supplement the erratic rainfall in the area.
The project has since yielded great results as families now have
enough for subsistence and for sale as witnessed by a recent visit by
the Radio VOP to Chiundura where women like Gatsheni exhibited their products.
Women and Land in Zimbabwe last year built a Value Addition Centre at Gambiza Shopping Centre which is furnished with oil pressing machines, grinding mill , computers and vegetable drier machine.
The centre has added value to the raw commodities which are then sold at a higher price than the raw produce.
â€œThe entire community has immensely benefitted from the project as we can add value to our raw produce which we can sell at a higher price. Our standards of living have really improved because we can take care of our families,â€ Gatsheni told Radio VOP.
The value addition centre is also furnished with computers which the
women can use to search for markets online with the help from local
teachers.
â€œWe are in the process of searching for markets and we do that online with the help of our local academics. We have since sold 1000 packets of dried vegetables to the Village Lodge,â€ said Gatsheni.
Vida Makamure, a mother of two said: â€œWe no longer rely on food
handouts because we have enough to take care of our families.â€
When Radio VOP visited Chiundura, women from around the country who have benefitted from the same program in their own districts exhibited various agricultural products.
Fikelephi Fuzane, 56 from Bubi District who has been a widow since
1998 has been surviving through agriculture and selling artefacts.
â€œWomen and Land helped us with information on how to get best yields from the small pieces of land we have. The value addition centre in our district has also helped us improve our products which have proved beneficial as customers are very keen to buy,â€ Fuzane said.
Theresa Chibvembe, 49 from Makoni, Rusape is now a proud owner of four cattle through the proceeds from the project.
â€œThis project has really empowered us as women because we can access land for ourselves without the interference of our husbands. I also managed to buy four cattle through the proceeds from my project back home,â€ a visibly excited Chibvembe said.
District Agricultural Extension officer, Edmore Mubaiwa has been
working with farmers here, assisting them in dealing with post-harvest loses.
â€œWe have been assisting farmers in dealing with post-harvest loses,
especially in handling yields because many farmers lose yields at the
most crucial time,â€ Mubaiwa said.
â€œWe also link farmers to markets by doing market research and this
strategy has really worked as witnessed by the number of inquiries
from major supermarkets,â€ said Mubaiwa.
Women in Zimbabwe have become bread winners amid massive retrenchments and economic meltdown that has grossly dis-empowered their male counterparts.
52 percent of women make the countryâ€™s population, whilst a
considerable number who stay in rural areas are responsible for food
production in the economy which is largely agro based.