The traditional voluntary male circumcision ceremony held annually within the Shangaani community in Chiredzi has been cancelled as hunger tightens its grip on the drought-prone district. 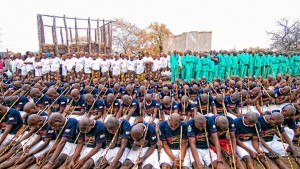 Every year dozens of young males go into camp for three months to undergo circumcision, but this year it is a different story since there is no food to feed the inmates during the process.

“As you are aware the inmates have to be fed for about three months while in camp and this year because Chiredzi district did not get any meaningful rains there no food,” said Provincial Aids Co-ordinator Evos Makoni.

“We had tried our best to get assistance elsewhere but nothing came up,” he added. Normally the villagers take care of the inmates in terms of food provision.

The local shief, Amos Hanyani, said they had approached government and other institutions to assist but no help was forthcoming. Last year 1,600 males graduated after undergoing circumcision amid concerns from traditional leaders over the role being played by health officials during the process.

â€œThe government should leave us to do our own cultural activities because if it interferes the traditional part of it will be completely eroded. We are even against the involvement of police officers who sometimes come and threaten to arrest people over our circumcision methods,â€ said the chief.

â€œThis has been a thorn in the flesh to us and we are advising government to keep its hands off the circumcision ceremonies that we normally conduct.â€

The government intervenedÂ  about six years ago after reports that some inmates were dying while in camp due to bad and unhygienic practices by the Shangaani community. The government through the National Aids Council is supervising all circumcision ceremonies being conducted in the country.

Makoni said since their interference in 2009 no deaths have been reported in camp while people were undergoing circumcision. He said the Council was working harmoniously withÂ  the Shangaani community to ensure that HIV and Aids is not spread while conducting circumcision ceremonies.

â€œAlthough I cannot say how many people had died prior to our intervention Iam happy to say that no deaths have been reported since we chipped in,â€ said Makoni. â€œWe are urging people to get circumcised in order to reduce the chances of getting HIV infection by about 60 percent.â€

The NAC only monitors the health part of the circumcision and does not interfere with the cultural practices of the community.