The City of Mutareâ€™s sewer department employees are working in a hazardous environment without protective clothing. 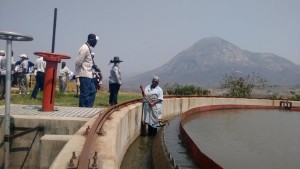 The workers are made to work in water filled with human waste with no proper protective clothing â€“ thus exposing them to serious health hazards. Several lamented how they have fallen ill on numerous occasions as a result of their working conditions.

â€œLook at where I am working and what I am wearing. I donâ€™t have gloves or a mask. The uniforms and gumboots I have are all worn out,â€ said an elderly female worker. Staff last received gumboots last year and gloves in January, although these items should be allocated quarterly, she said.

The employees work in the clarifier, which purifies the human waste sewage water before it is discharged into the main water bodies. Another long serving employee also lamented on the state of the work.

â€œIt is like our employer no longer knows that we exist. They have virtually turned their back on us. We come to work every single working day but our hard work is not recognised. Look at how we are dressed and the area that we work in – yet our bosses visit this place and act as if they donâ€™t see this. We have fallen ill on several occasions. It would have been better if they at least gave us milk to cleanse our system after we complete our duties if they donâ€™t have money to buy us protective clothing,â€ lamented the employee.
Other employees who work at the Dangamvura sewer plant said their situation had been exacerbated by the fact that they last received their salaries 15 months ago.

The revelations come at a time when the African Development Bank (ADB) and Zimbabwe Multi-Donor Trust Fund (ZimFund) have injected close to $10 million to refurbish dilapidated water and sanitation infrastructure. Part of this was used to rehabilitate and expand the Dangamvura sewer plant as well as purchase protective clothing among other things.

ZimFund was established in 2010 by the donor community to facilitate urgent assistance to Zimbabwe after the deterioration of its water and sanitation infrastructure as a result of the effects of the economic meltdown. The projects are to benefit a combined total population of 2,5 million in six selected cities.

ZimFund together with AfDB, Finance Ministry, City of Mutare and residents trusts recently toured sites that benefitted from the fund in the eastern border city. They include Gimboki Treatment Plant, 12 kilometre Mutare outfall sewer and the 10 mega litre Chikanga Water Reservoir.

They are also funding the upgrading of the chlorination system at the Odzani Water Treatment plant, staff training programmes and supply of sanitation vehicles, equipment and tools.