The alleged coup plotter who was arrested in a dramatic military swoop in central Harare on May 5 2007 says he fears for his life after he was recently mugged by suspected state agents. 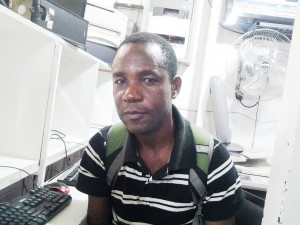 Emmanuel Marara: My life is under attack again after spending four years in prison for nothing back home.

Together with retired army captain Albert Matapo and five others, Emmanuel Marara, a former Warrant Officer Class Two based at Pomona Barracks, was accused of leading a plot to topple President Robert Mugabe and replace him with the then Defence MinisterÂ  Emmerson Mnangagwa, who is now vice president.

â€œI thought by leaving Zimbabwe these Zanu (PF) people and their security personnel masquerading as soldiers and intelligence operatives would just leave me alone, but I was wrong,â€ Marara told The Zimbabwean this week.

â€œBefore I was attacked I was followed wherever I went. At some point a camera flash hit me, but I did not see who took the picture. I am worried because I do not know where my picture was taken to. Last week I was attacked by four guys who told me that I thought I could run and hide but thatÂ  has never happened where they are involved. I suffered a lot of bruises, but I escaped as I screamed resulting in them running away because they did not want to attract public attention. This all happened in downtown Johannesburg.Â  I am now keeping close to where I stay because I do not know what will happen to me,â€ he said.

Marara is afraid to report the incident as the South African police and its intelligence operatives are known for spearheading abduction and rendition of Zimbabweans.

â€œI am just living in hiding hoping by staying indoors they will give up on me. I cannot trap myself and hand over myself to the SA cops because they operate with these Zimbabwean thugs who are hunting us down for being against Mugabeâ€™s misrule. What we only want is for Mugabe to go in a peaceful way – not all these lies that we are coup plotters. The problem is my family is suffering in the process as I am a sole breadwinner. My life is under attack again after spending four years in prison for nothing back home,â€ added a worried Marara.

Disease and death
When he was released from prison in 2011 he publicly talked about the hunger, disease and death he had witnessed there. â€œAt one time, especially in 2008, an inmate population of 1 700 was fed with â€œtwo bins of cabbageâ€ served with minute morsels of sadza as a dayâ€™s meal. As many as 20 people died on a daily basis at one point,â€ said Marara, who spent exactly four years and one day in secret military torture chambers, army detention barracks, police holding cells and the notorious Class D cells of Chikurubi Maximum Prison.

Marara still professes innocence. In fact, he is dumbfounded anyone could have fathomed he could have ever contemplated removing Mugabe from powerÂ  through a coup. He rubbished controversial musician-cum-Zanu (PF) activist Energy Mutodi who recently fingered him as part of the crew said to be plotting to assassinate VP Mnangagwa.

â€œWhy would I want to kill failed politicians? Why would I work with people like Phelekezela Mphoko who have always worked against the people of Zimbabwe? The Mutodi person must learn better ways of boot-licking. I do not care about what happens in their house. I have a life to live out of the Zanu (PF) territory. They should deal with their issues as killers and leave my name out of it. Let Mphoko kill them, itâ€™s not my duty to play their dirty politics and decide who should be the leader,â€ he said.