PAMENUS TUSO reports that women's grocery buying clubs are on the increase as hard-pressed consumers continue to use various entrepreneurial avenues in order to survive. 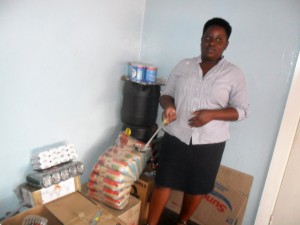 A member of the Eston saving club showing some of the groceries.

With the state of the economy failing to improve, grocery buying clubs are a survival tactic to which many enterprising women have reverted to in order to feed their families. People are organising themselves into groups or clubs with each member contributing money towards a combined fund.
Contributions can range from as little as $1 to as much as $100 for any given period, be it daily, weekly or monthly, depending on the club membersâ€™ decision. The money is then used to purchase groceries and kitchen utensils.

Buy in bulk
Some clubs have even incorporated medical contributions that assist members to offset medical bills and purchases of medication in the event of a member falling ill.

â€œGrocery buying clubs help to save money and cut costs. We are able to buy in bulk from wholesalers which is far cheaper than buying single items in retail stores,â€ said Soneni Ndlovu, chairperson of a Bulawayo-based grocery buying club know as Eston.

Members contribute $30 each per month. Ndlovu explained that her club is comprised of five young women. They purchase a six-pack of 750 ml washing liquid at $10,36 from the wholesaler whereas a single bottle of 750 ml purchased at the local store costs $3,50.

â€œOne can clearly see that this scheme is cheaper. In our club, we also buy and share kitchen utensils once a year. We buy some of our products in South Africa where they are far cheaper,â€ said Ndlovu.
Miriam Sigogo, the leader of the Mzilikazi-based Vukani Vafazi buying club, echoed the advantages of being a member of a buying club.

â€œI owe all the property in my house to the club that I belong to. Through the club, made up of women from my church, I have managed to buy a freezer, sofas, a four-plate stove and a kitchen unit. Each member contributes $35 every month,â€ said Sigogo, who is a food vendor.

Men too
Men have also formed and joined clubs. â€œOur clubs are not necessarily grocery buying clubs. We contribute money each week that we share among members at the end of the year. Some members use the money to buy food, others spoil themselves during the festive season or pay school fees,â€ said Nhubu Murefu, a member of the Royal savings club.

These clubs have also managed to bridge the social divisions normally found in communities as both lower and middle class people are free to join provided they can meet the monthly financial requirements. Clubs also provide platforms for members to share social, political and economic experiences.