Star athlete Munyaradzi Jari was this week elated after he cruised to a double victory - winning the Township2Township 42km and Richmond 16km races within a space of three days. 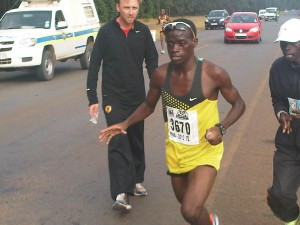 â€œIt is always a big achievement to win a race like the Township2Township, which attracts many talented athletes. The competition is always tight and that means anyone who wins is a top star,â€ Jari told The Zimbabwean after the race.

â€œIt is difficult to win two races within a space of three days, but I somehow did it and I am very happy to have managed to score such an achievement. A few days back, I won the Richmond race and I believe it is the one that propelled me to win the Township2Township race.

â€œI am very thankful to my manager, Craig Fry and his wife making my career a successful one. They have always been supportive, believed in me and encouraged me to keep fighting to win.

Township2Township was very competitive and there a lot of hills but I kept going until I made it. I always work hard and I am very sure that it pays off at the end.â€ The 25-year-old, Rusape-bred and Fast Way AC athlete however, still wished he had participated in the Cape Town marathon last weekend.

â€œI wanted to win that Cape Town race, but I could not participate due to some financial challenges that I faced. I believe one day I will be able to beat the challenges and participate because I feel I can snatch a win there as well.â€ Two years ago, Jari provided the fastest-ever winning time in the 17-year history of the Weekend Witness Maritzburg Marathon, after he burst through the line in two hours, 22 minutes and four seconds.

He has also nearly won the Mandela marathon in 2012, where he came second, and he also got a silver medal in the MosseBay PetroSA marathon.