The statistics and projections regarding the prevalence of cancer make for frightening reading. FARAI MABEZA reports. 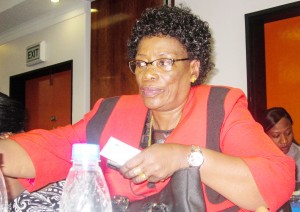 Zimbabweans have, for a long time, lived under the scourge of HIV/AIDS, but the burden was beginning to ease due to the emergence of antiretroviral drugs.
However, it is expected that cancer will in fact be the number one killer in the decade following 2020, not only in Zimbabwe but throughout sub-Saharan Africa.
â€œThis means that we should address cancer with the same vigour as we tackled HIV and malaria,â€ Ntokozo Ndlovu, the chairman of the Radiation Protection Authority of Zimbabwe, recently told a media workshop on cancer.
Health experts are alarmed at the lack of awareness about this killer disease among the general populace and believe that increasing cancer awareness is the key to battling the disease because cancer awareness will allow for early detection of symptoms.

Diagnose early
â€œIf you can diagnose cancer early you have a chance to treat and cure cancer,â€ stressed Wilson Mandere, founder of Breast Cancer Alleviation.
Ndlovu advised that people need information about what to do and where to go if it is suspected they have may have cancer. â€œCancer is a disease that needs advocacy. It needs to be talked about. Even in the developed world there are partnerships to move this agenda forward,â€ said Ndlovu.

Most common cancer
According to the Ministry of Health and Child Care, cervical cancer is the most common form of cancer among women in Africa with the majority of deaths occurring in middle aged women.
In this country it accounts for one third of all cancers among women. Statistics from the health ministry underline the gravity of the situation – 80% of women will be exposed to the Human Papilloma virus that causes cervical cancer. In a healthy woman it can take 10 to 20 years before the cancer develops, but much less time in a woman who is already HIV positive.

Are you at risk?
Among the risk factors for cervical cancer are early age sexual intercourse, multiple sexual partners, HIV infection and smoking.
Preventive measures include having only one sexual partner, being vaccinated against HPV and being screened using visual inspection with Acetic Acid and Cervicography or having a pap smear.
Ministry of Health and Child Care deputy director for Reproductive Health, Margaret Nyandoro, said the problem was compounded by early sexual activities. â€œSome children as young as nine are sexually active,â€ said Nyandoro.
The fact that cancer is not receiving serious attention is clearly a source of frustration for health experts and it is not only government that is getting the blame, but the public and the donor community as well.
â€œIt is the duty of every individual to take care of their own health,â€ Nancy Jonker from the Diagnostic Imaging Centre Nuclear Medicine said.
Director of the Kaposi Sarcoma (KS) Clinic at Parirenyatwa Hospital, Margaret Borok bemoaned the lack of interest from donors. HIV is massively supported but not cancer. KS is common in HIV-positive patients.

Inadequate research
To underline the inadequacies of current cancer intervention, Borok pointed out that available research data do not tally with what is actually happening on the ground.
â€œWe are seeing more patients than our registry would lead us to believe,â€ she said. â€œThis makes me think that the disease is out there, but that we are not seeing it.â€
Another problem is that while the number of organisations dealing with cancer is growing they don’t reach enough people.
â€œOur capacity is too small. We only have offices in Harare and in Bulawayo and these don’t even adequately cover their areas of operation,â€ said Junior Mavu, spokesperson from one of the oldest organisations, the Cancer Association of Zimbabwe.

Lack of info
Nelson Ngwaru from the Cancer Alliance of Zimbabwe emphasised that the cancer problem should be looked at as an information deficiency issue.
â€œIn 2013 we carried out a cancer information level survey touching different demographics from parliamentarians, students to journalists. The results we obtained were shocking,â€ Ngwaru.
He cautioned all interested parties including the media to ensure that information given out is accurate. â€œInformation can be beneficial, but it can also be dangerous if it is inaccurate. There is a danger in taking information from the internet and publishing it when it has not been verified or authenticated by local experts,â€ Ngwaru said.

Danger of faith healers
To fully educate the people of this country on cancer, we need to overcome the hurdle that stems from commonly held traditional beliefs among people who only opt for medical care as a last resort after having exhausted every local traditional- and/or faith healer.
â€œWe lose many patients to traditional healers and faith healers,â€ KidzCan Children Cancer Relief Organisation director Ntombi Muchuchuti told this reporter.
Borok explained that making increased information available would help communities to give the necessary support to patients.
â€œWe need more education and more cancer awareness to be passed on through the use of fliers and posters.Â  We need frequent and repeated outreach and training at all levels of the community and not only for the medical community,â€ she said.
Cancer patients face many challenges such as travelling expenses and the general lack of money. People often have competing priorities such as school fees and food which are weighed against the cost of treatment and chemotherapy.