A large group of exiled Zimbabweans protested in Central London on Tuesday morning outside a meeting at which a delegation representing the Mugabe regime tried to persuade people to invest in Zimbabwe. 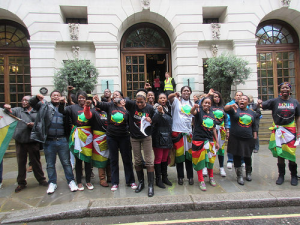 The delegation was led by Industry and Commerce Minister Mike Bimha and included leaders of some bankrupt parastatals.

Displaying posters reading: â€˜Donâ€™t fund Mugabeâ€™, â€˜51% tax on investmentâ€™, â€˜Britain donâ€™t invest with Mugabeâ€™s govt of thievesâ€™,Â Â  â€˜Where is Itai Dzamara?â€™ and â€˜Bring back Itai Dzamaraâ€™ we handed out the following flyer as people went into the building:

A friendly warning to anyone thinking of investing in Zimbabwe.Â

For every Â£100 invested you can immediately lose Â£51 because of Mugabeâ€™s indigenisation policy.

Despite talk of relaxing the opaque indigenisation rules, Mugabeâ€™s nephew Patrick Zhuwao has just been appointed the new Indigenisation Minister and insists he will push ahead with the programme â€˜for black empowermentâ€™. This requires white and foreign-owned businesses to cede a 51% stake to local black â€˜businessmenâ€™ ie Mugabeâ€™s Zanu PF cronies.

For an overview of the financial situation in Zimbabwe see the article by Todd Moss and Jeffrey Smith published on the Center for Global Development website, see: http://www.cgdev.org/blog/washington-and-imf-shouldn%E2%80%99t-follow-zimbabwe-over-another-cliff. Todd Moss is a former US deputy assistant secretary of state for Africa. Jeffrey Smith is s an Africa specialist at the Robert F. Kennedy Center for Human Rights.

They sayâ€˜Zimbabweans should not expect economic recovery while Mugabeâ€™s heartless and economically illiterate junta remains in chargeâ€™.

So our message to you is: hold back on investment untilthere is a return to the rule of law in Zimbabwe.â€™

Stony-faced Zimbabwean delegates and officials refused to take the flyer but others read it with interest.

As the meeting got underway, they could not fail to hear us singing and dancing outside, punctuated with chants of â€˜Down with Mugabeâ€™. Draped on the railings across the road they could see our banners: â€˜End murder, rape and torture in Zimbabweâ€™ and â€˜No to Mugabe, no to starvationâ€™.

The demonstrators gave a cheerful thumbs down when they were filmed by an obvious CIO agent.

The demonstration was organised by the Zimbabwe Action Forum on behalf of the Zimbabwe Vigil and the Restoration of Human Rights in Zimbabwe (ROHR). Another protest is planned for Wednesday outside the Zimbabwe Embassy in London starting at 2.30 pm when the Zimbabwe delegation hopes to persuade the diaspora to prop them up financially.

For pictures of the protest check: http://www.flickr.com/photos/zimbabwevigil/. Please note: Vigil photos can only be downloaded from our Flickr website.