Mamelodi Sundowns coach Pitso Mosimane has all but admitted that Zimbabwean striker Nyasha Mushekwi might have slipped out of the Braziliansâ€™ hands. 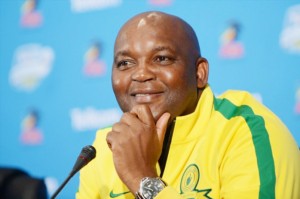 Mushekwi, who has not had a good time with the Tshwane outfit since Mosimane took over the reins about two seasons ago, is currently in the books of Swedish topflight outfit, Djurgardens, following a second loan spell to Europe from Sundowns.

He has played so well there â€“ scoring 12 goals on loan and attracting growing interest from a number of other top European clubs, including those in Sweden, England and Germany.

“Nyasha is our player but we don’t know if we can still say so,” said Mosimane in an interview recently. “Everybody wants Nyasha in Europe and he wants to play overseas and we just have to respect that. I honestly don’t think Nyasha will play for Sundowns again.

He wants to stay in Europe.” Unlike other South African coaches, Pitso is seemingly in charge of who moves and out of the Mamelodi Sundowns dressing room and his veiled admission that Mushekwi could be let go should come as a relief to the former Caps United hit-man and one-time winner of the Zimbabwean PSL Golden Boot award, who has of late been in the dark about his next base.

Mushekwi has been in and out of Absa Premiership side, where he has been deemed surplus to requirements during the last two successive seasons under Mosimane.

Following a brilliant run in which he rattled the nets nine times in 12 appearances since joining the Swedish side in March, Mushekwiâ€™s agent, Ralph Nkomo, had previously revealed the star would soon hold some decisive talks on his future with Sundowns, who still have the option to renew his contract, after the initial three-year deal ended in June. Djurgardens are reportedly interested in offering the 27-year-old striker a permanent deal, while a number of other top European sides are also lurking on the sidelines with a keen interest.