Former Zanu (PF) womenâ€™s league boss Oppah Muchinguri-Kashiri has appealed to fighting party members to bury the hatchet and find common ground in a move widely interpreted as a call for a truce with her arch-rival Mandi Chimene. 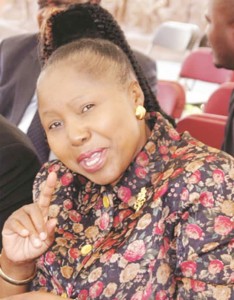 Muchinguri-Kashiri took advantage of the recent provincial coordinating committee meeting to speak at length about the need for unity despite personal differences in order to advance the partyâ€™s agenda.

Though she did not mention Chimene by name, it was evident that her remarks were directed at her. â€œIf there are problems, letâ€™s use internal party structures to resolve them rather than washing our dirty linen in public. Zanu (PF) is greater than any individual. We need to move as a united party and work together in peace just like we did in the previous elections in which we defeated our enemies,â€ she said.

She said the divisions rocking the province were a resemblance of an election fever where others are jostling to take control of the region.
â€œThis is just an election fever as others want to control the province but it will come to an end after elections. Letâ€™s not waste time over petty issues. We need to respect our roles and we will not have any problems,â€ she said. The call came during the height of tension between her and the tough-talking Provincial Affairs Minister Chimene.

The inevitable fall-out was triggered by a leaked audio recording of Muchinguri-Kashiri plotting the downfall of several provincial central committee members, Chimene included.
Chimene reacted by hosting a press conference where she savaged Muchinguri-Kashiri as a misguided, factional member with no roots in Manicaland.

The two have been fighting to take control of the eastern border province following the expulsion of former secretary for administration Didymus Mutasa, who was regarded as the political godfather of Manicaland for 35 years. His demise created a vacuum that Muchinguri-Kashiri as the second most senior figure sought to fill. But Chimene, powered by her new influential post as State Minister, harboured similar ambitions, marking the beginning of their power struggle.