Fifteen years after embarking on a disastrous campaign to nationalise all white-owned farms and businesses, President Mugabeâ€™s Zanu (PF) now concedes that indigenisation is a flop. 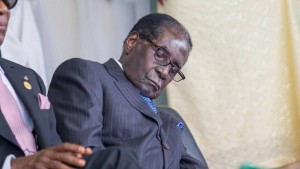 Mugabeâ€™s indigenisation policy is the chief cause of investor aversion.

Mugabeâ€™s Animal Farm-style invasions began in the agricultural sector where almost all 4 000 white commercial farmers were dispossessed of their land â€“ often violently â€“ without compensation. Homesteads and farming implements were either looted or vandalised in a nationwide campaign led by militia and veterans of Zimbabweâ€™s liberation war.
The ostensible reason for the farm takeovers was to â€˜correct colonial imbalances.â€™ Only loyalists of Mugabe benefitted from the land redistribution. Government ministers, senior army officials, war veterans and their collaborators received the lionâ€™s share of arable land, which now lies fallow.
In the countryside, poorly supervised mining activity has left vast stretches of land, pockmarked with pits and tree stumps. Government has no data on the number of existing miners, who have become a law unto themselves. Other than haphazard mining activity, tobacco farming is also the cause of massive environmental degradation, as new farmers cut down trees for firewood to cure their crop. Until Zanu (PF)â€™s year 2000 re-enactment of barn animals chasing away the farmer, coal was in the preferred fuel in tobacco curing.
The seizure of commercial farming land preceded the controversial indigenisation policy, in terms of which all foreign owned companies are required to surrender controlling stake (51% ownership) to indigenous persons, ironically defined by the son of a man whose origin is indeterminate as black of Zimbabwean origin. Mugabeâ€™s indigenisation policy is the chief cause of investor aversion. The indigenisation campaign has been fraught with ambiguity and corruption on a grand scale â€“ remember Saviour Kasukuwereâ€™s NIEEBgate scandal.

Self-enrichment campaign
The purported logic is to empower previously disadvantaged people, but in reality this is only a self-enrichment campaign for the politically connected. It seems illogical to demand half ownership in an enterprise built on the blood, sweat and tears of somebody else, regardless of the history. After all, every worldly possession can be traced back to unfair acquisition. All cattle, for example, may have been the spoils of some tribal war in a previous era. For government to demand equity of legally owned business, in an age of property rights, is effectively a regression to the anarchy of olden days, if not a state-sanctioned version of racketeering.
In December 2014, Youth, Indigenisation and Economic Empowerment Minister Chris Mushowe said government could seize more assets if ever they wanted to.
â€˜In fact, they (foreigners) are very lucky that they get 49%. In fact 49% is the maximum and 51% is the minimum so itâ€™s not cast in stone. It can be 1% to foreigners and 51% for locals can be 99% because itâ€™s a minimum. We are a sovereign state, we welcome foreign direct investment, we welcome foreigners to come into our country and invest but certainly on our terms,â€™ Mushowe said.
To nobodyâ€™s surprise, Zimbabwe lags behind its neighbours in FDI receipts. The economy of Mozambique â€“ a war-ravaged country â€“ is on the up. While Zimbabwe only received $545 million in FDI in 2014, Mozambique saw inflows of $4,9 billion, surpassing Zimbabweâ€™s entire national budget. South Africa and Zambia recorded $5,7 billionÂ  and $2,4 billion respectively.
Once upon a time, human resources moved only in one direction â€“ from Mozambique to Zimbabwe â€“ during our eastern neighbourâ€™s lean years, precipitated by decades of war. Now, the positions are reversed; Zimbabwean immigrants have flooded Maputo, in pursuit of better living standards.

Bleak House
Zanu (PF) through its propaganda puppets â€“ ZBC and Zimpapers â€“ continually uses words like â€˜soonâ€™ and â€˜megadeals.â€™ But the reality is that Zimbabwe is on the precipice, if it has not already tipped over the edge and is hurtling into the abyss. Bulawayo South MP, Eddie Cross, paints a very bleak picture.
â€˜The consequences will be fully established by year end where we are likely to see hospitals unable to function, except as mortuaries, and schools becoming day care centres for young people who will not get any education. The Diaspora will struggle to feed their extended families back home. Internationally we remain as isolated as ever. Even the Chinese are saying that to qualify for their assistance we have to reform the way we do things. In the absence of fundamental political social and economic reforms, there will be no possibility of any international assistance. The only option for Zimbabweans caught up in the spiralling crisis will be to flee and find refuge in other countries,â€™ said Cross.
Only 35 years ago, at independence, we were the twinkling gem of Africa. At our liberation, we chose a name that echoed both our history and resilience; Zimbabwe, the house of stone. Our country was the destination of choice for jobseekers, tourists and scholars keen to see an example of a country headed in the right direction. Mugabe was speaking reconciliation then â€“ â€˜let us beat our weapons into plough shares.â€™ But after decades of maladministration we have become â€“ to borrow a Dickensian title â€“ the bleak house of stone.

Sanctions, Bush or Blair
Mugabe is feeling the heat â€“ swollen government debt, over 90% unemployment, hospitals without latex gloves or medicine, state revenue almost outstripped by wages, daily business closures, 1,5 million citizens in need of food aid â€“ hence the sudden change of tack. In his State of The Nation Address, there was none of the usual arrogance. For once, Mugabe did not mention sanctions, Bush or Blair. And now, from the very same lips that threatened to take 99% of foreign shareholding, comes a different song.
â€˜The only area where we do not entertain negotiations is mining, because as indigenous Zimbabweans, our contribution is the mineral resource. In other sectors, proposals are considered case by case. We are saying to the investors, if you come, your investment is safe, but we encourage you to partner locals,â€™ says minister Mushowe.
What was that? Sounds like Mushowe chewing on a forkful of humble pie, with his mouth open.

New wine in old skins
Sadly, a reversal of the indigenisation law is hardly sufficient to attract investment. In fact, any change of law is pointless, as long as the present government remains in power. Relations with external funders have deteriorated to the point where only a change of leadership can attract FDI.Â  Even with a new marble floor, a pit latrine will never become a five star establishment.
Mugabe is a proud man. When a diplomatic apology could have easily pulled Zimbabwe out of global isolation, he maintained a hard-line â€˜them versus usâ€™ position. At each rare opportunity to make peace while at the UN, he repeatedly taunted the most powerful nations while at the same time living off their aid.
â€˜Your investment is safe, but we encourage you to partner localsâ€™ â€“ That is the closest a proud old man can come to saying â€˜I was wrong.â€™
â€˜All animals are equal…but some are more equal than others.â€™ The rules change overnight on Animal Farm. Should we be surprised when Mugabe shilly-shallies on policy? – Till next week, my pen is capped. JerÃ  Twitter @JeraZW